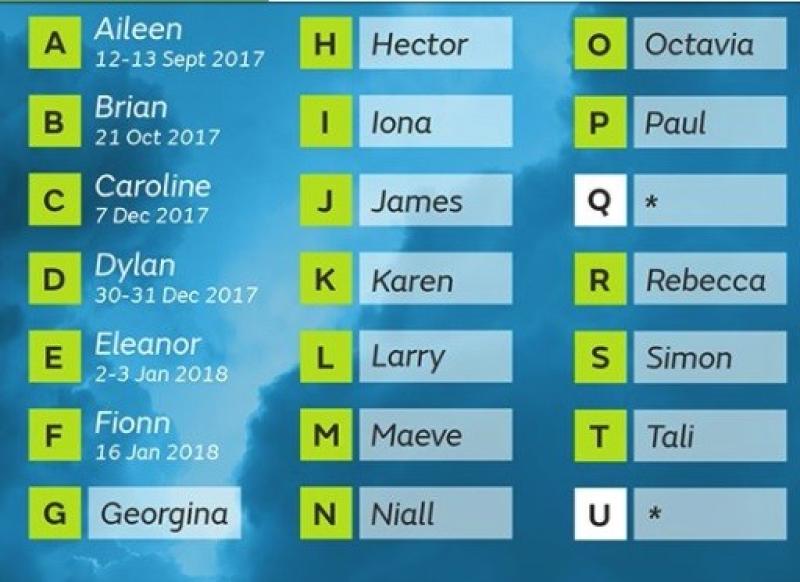 Georgina is the seventh extreme weather event to be given a Storm name by Met Éireann and the UK Met Office this year under a naming agreement reached in 2015 to help alert the public to dangerous weather.

Aileen, Brian, Caroline, Dylan Eleanor and Fionn were the previous names given to winter storms under the partnership the next storm will be named Hector.

The naming agreement was reached after the two forecasters ran a pilot project to name wind storms that were expected to affect the UK and Ireland.

The forecasters felt that by working together, naming storms raised awareness of severe weather and ensure greater safety of the public. The agreement was made permanent after it proved effective among the public.

In recent years the naming of wind storms that affected Ireland and the UK (such as the 'St Jude's Day' storm - October 2013) highlighted the benefits of establishing a formal system for the naming of mid-latitude storms.

As storms moving in from the Atlantic often first make landfall in Britain and Ireland, Met Éireann and the Met Office believed stared naming severe storms through the autumn and winter 2015/16.

Gerald Fleming, Head of Forecasting at Met Eireann, said in 2015: "It may be a cliche to say that the weather knows no boundaries, but increasingly the same can be said for news. When severe weather threatens National Met Services have the significant challenge - above and beyond the technical forecasting challenge - of bringing coherent and consistent messages to the public, to enable effective action in response. Putting names on severe storms helps the public to immediately relate to threatening weather systems.

"As we share a common interest in North Atlantic storms, it makes sense for Met Éireann in Ireland and the Met Office in the United Kingdom to share a common naming system for severe windstorms. We in the forecast office in Dublin look forward to working with our colleagues at the UK's national forecaster in using this common naming system for severe Atlantic storms, helping us to better communicate impending threats to the peoples of our islands," he said when the pilot started.

Storm names will then be taken from a prepared list drawn up by both sides, in alphabetical order, alternating between male and female names.

A storm will be named when it is deemed to have the potential to cause 'medium' or 'high' wind impacts on the UK and/or Ireland, i.e. if a yellow, amber or red warning for wind has been issued by Met Éireann and/or the Severe weather warnings (NSWWS).

To ensure compliance with the US National Hurricane Centre naming convention, names which begin with the letters Q, U, X, Y and Z are not inclued. This will maintain consistency for official storm naming in the North Atlantic.

To avoid any confusion over naming, if a storm is the remnants of a tropical storm or hurricane that has moved across the Atlantic, the already established method of referring to it as, e.g. 'Ex-hurricane X' will continue as was the case with Ophelia which hit Ireland last October.