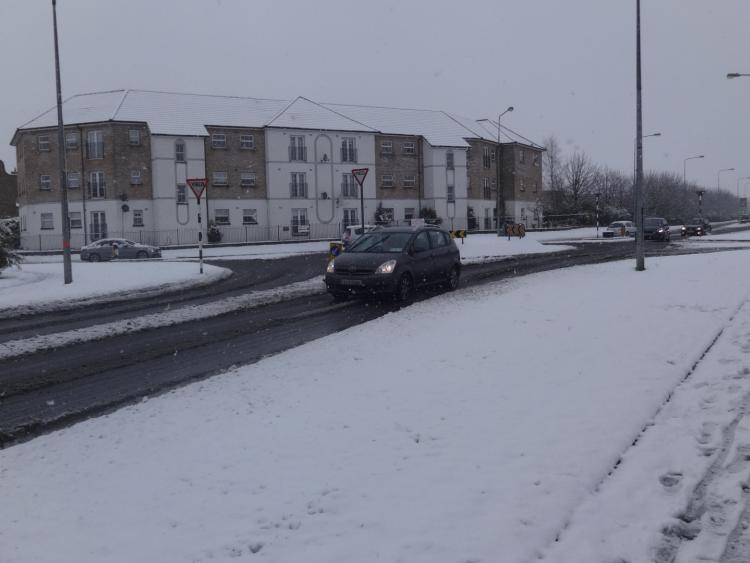 A snow ice weather warning is in place for Laois, Leinster and other counties leading to treacherous roads.

It says there wall be falls of snow from Monday evening, with accumulations totalling up to 3cm possible in some areas, leading to treacherous road conditions by Tuesday morning.

In its forecast Met Éireann says it will be cold and largely dry on Sunday night apart from isolated showers near eastern coasts. Long clear spells will occur in near calm conditions allowing a few mist and fog patches to form. Lowest temperatures of minus 4 and plus 1 degrees Celsius, leading to a widespread sharp or severe frost and the risk of ice on untreated surfaces.

The forecaster says it will be cold with variable cloud and some sunshine to begin on Monday, with frosts only slowly clearing during the morning and just the risk of the odd light shower near the east coast.

Cloud will thicken and rain will arrive in the Atlantic coastal counties during the afternoon, however. Daytime highs just 3 to 6 degrees Celsius in light east to southeast breezes.

Rain is due to extend eastwards to all parts on Monday night, turning to sleet and snow, with snow depositions likely over the midlands, north and east. Minimum temperatures of minus 2 to plus 2 degrees Celsius, but less cold in the west before midnight. Light to moderate south to southwest breezes veering northwest and freshening as the rain and snow clears.

Tuesday is likely to be a cold, bright day with sunny spells and scattered wintry showers. The showers will be largely confined to the north and west during the day, with some hail, sleet and snow leading to some small accumulations. Maximum temperatures on Tuesday of 3 to 6 degrees, but feeling colder owing to brisk northwesterly winds.

Cold and frosty on Tuesday night with a scattering of snow showers spreading eastwards followed by clear skies. Winds will fall light and a widespread severe frost will follow with icy patches.

Wednesday is set to be mainly fine and frosty to begin in the east, but cloudier in the west with drizzle along the Atlantic Seaboard by noon. Thickening cloud and rain will gradually extend countrywide during the afternoon and evening, possibly preceded by sleet or snow in eastern counties for a time, in freshening southwesterly breezes. Daytime highs of 3 to 6 degrees Generally, but 7 or 8 degrees near Atlantic coasts.

Thursday and Friday are likely to continue cold and changeable. A lot of dry weather over the south and east, but wintry showers will recur at times across the north and west. Night frosts will be sharp and extensive.