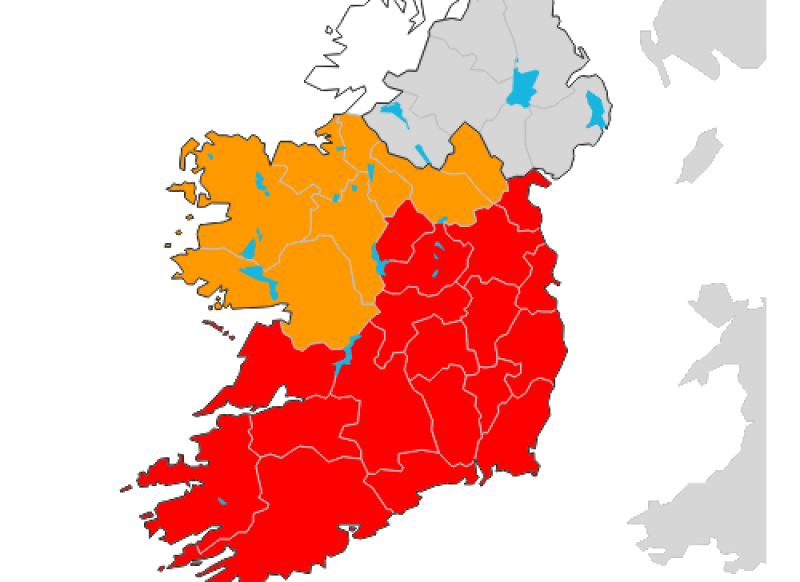 Beast from the East set to Collide with Storm Emma.

A Status Red Weather Warning has been declared as the Beast from the East weather front is set to collide with the Storm Emma over leading to heavy snow to Ireland.

The decision was announced at 11am Wednesday morning by Met Éireann as  the National Emergency Coordination Group on Severe Weather met in Dublin.

The warning is for snow-ice Warning for Munster and Leinster says Blizzard-like conditions will develop in heavy snow and strong easterly winds on Thursday evening and will continue Thursday night and Friday morning giving significant snow drifts in many areas.

The warning is valid from 4pm Thursday, March 1 to noon Friday, March 2.

A Status Red Warning Snow Ice issued at 5am on Wednesday has not been extended beyond Dublin, Kildare, Louth, Wicklow and Meath. It warns that total snowfall up to midday Thursday may reach 25cm. It is valid until noon Thursday, March 1.

Weather warnings have been issued for snow-ice.
The Map shows counties affected by these warnings. See https://t.co/sLGHpXxrhm for details. pic.twitter.com/gJ8Bh6LB6e

A Status Orange Snow Ice Warning has been issued for Connacht, Cavan and Monaghan. From 8pm Thursday, March 1 to noon Friday, March 2.

A Red level warning is only issued in rare cases of severe weather. Met Éireann says it implies that recipients take action to protect themselves and/or their properties. This could be by moving their families out of the danger zone temporarily. staying indoors, or by other specific actions aimed at mitigating the effects of the weather conditions.

The criteria for a Status Red Snow/Ice warning is that significant falls of snow are likely to cause accumulations of 8 cm or greater. The extent of the snow would lead to slippery paths and roads due to accumulation of ice on untreated surfaces; situation likely to worsen.

A Red Warning for low temperatures is issued when conditions fall to minus 10C or lower and that they only rise to minus 2C or lower.