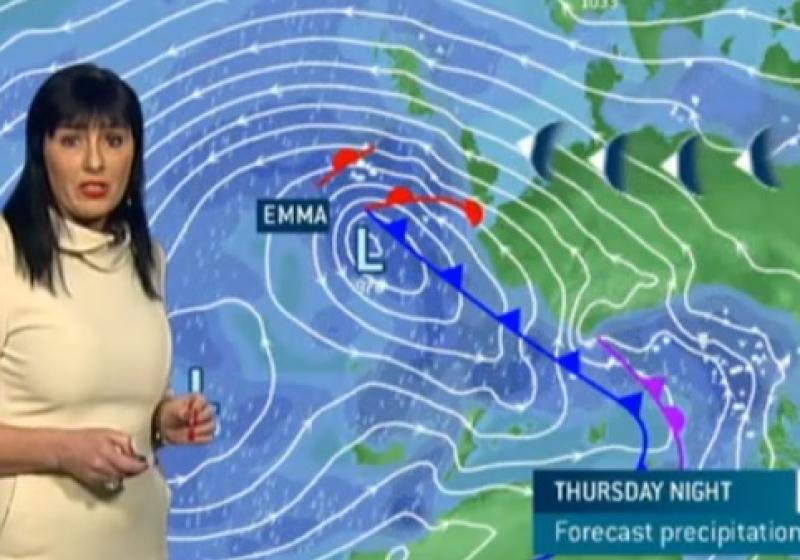 Up to date weather forecast for the coming days

Met Éireann's latest forecast on the clash between Storm Emma and the Beast predicts that conditions may not ease up significantly until Sunday and it is likely to remain very cold as the Siberian air will not move far away despite the influence of the mild weather driven up by Storm Emma.

The forecaster says the next couple of days will see blizzards, bitterly cold strong cold winds starting late tomorrow afternoon and running through much of Friday. There is also the risk of a storm surge in some parts.

Parts of the country will grind to a halt over the next two days as a Red Snow-ice Warning in place for Munster and Leinster from tomorrow until on Friday,

Depending on its impact, many people could be housebound for much of the weekend. The chairman of the group tasked with responding has warned that it will not be business as usual in the aftermath. Sean Hogan also warned that lives are at risk during the event.

According to Met Eireann, tonight there will be further disruptive snow showers, especially in Leinster, south Munster and parts of east Connacht. Significant accumulations are expected with widespread severe frost and ice. Lowest temperatures of -3 to -8 degrees in fresh and gusty easterly winds.

Bright spells tomorrow morning with scattered snow showers and widespread ice and lying snow. However, during the afternoon and blizzard-like conditions will develop across Munster and Leinster as heavy snow together with driving easterly winds spread northwards.

Good dry periods across Connacht and Ulster with just a few snow showers. Highest temperatures from -1 to +2 degrees and strong to gale force easterly winds will bring the risk of coastal flooding along southern and eastern coasts.

Heavy snow will extend northwards through the country during Thursday evening and overnight in driving easterly winds leading to blizzard conditions and drifting snow. Munster and Leinster will see the worst snowfall but all parts will get significant snow accumulations. Temperatures will range -1 to -4 degrees. There is also a danger of coastal flooding along southern and eastern coasts.

WHAT IS CAUSING THE BEAST FROM THE EAST?

There will be heavy snowfall in many areas during Friday with strong and gusty easterly winds with conditions. The snow may turn to sleet near southern coasts before drying out generally in southern counties later in the day, but snow will persist further north.

It will be another bitterly cold day, with highest temperatures around 0 to 2 degrees Celsius, but there will be a slight rise in temperatures to around 3 or 4 degrees Celsius in some southern counties. Widespread frost and icy conditions on Friday night and there will be further snowfall for a time in central and northern counties, but the drier conditions will extend northwards through the night and winds will ease off somewhat.

According to Met Eireann, it will be cold on Saturday. Many places will be dry for much of the day. Fresh easterly winds will make it feel cold in temperatures of 2 to 5 degrees Celsius, highest in the southwest and coldest in the north and east.
Sleet and snow will return to southern areas during the evening and move northwards overnight. Some falls of snow overnight and icy conditions.

On Sunday there will be outbreaks of rain, sleet and snow for a time in the morning, but it will turn more showery during the day and snow will turn to rain. Becoming slightly less cold and afternoon highs will range from 4 to 6 degrees Celsius in moderate southeast winds, fresh on some northern and eastern coasts. Frosty overnight.