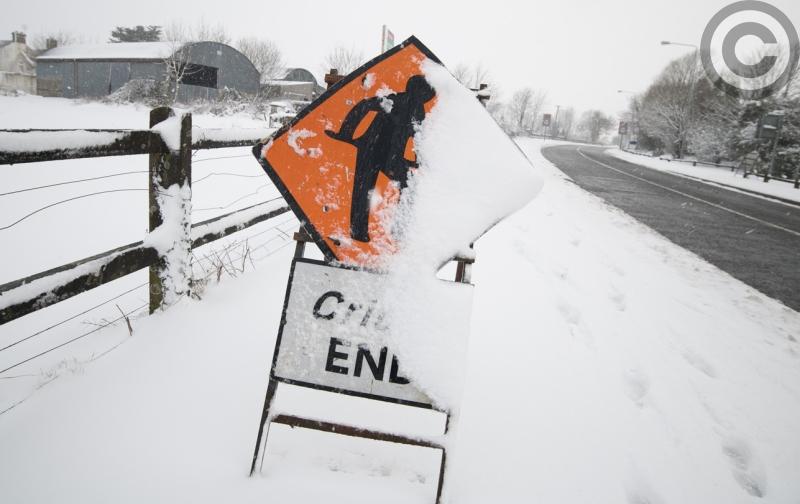 Met Éireann has warned that the a Status Red weather warning remains in place for Laois, Kildare, Dublin and many other parts of the country with Storm Emma pushing more snow barreling into Ireland which remains in the grip of the beast.

Record amounts of snow have fallen in the past 24 hours and the latest radar picture confirms that more snow is coming.

The forecaster lifted its nationwide red alert at around 6am on Friday but more than half of the country is still subject to a warning.

It says Friday continue very cold with scattered outbreaks of sleet & snow. The snow will be heavy & persistent across the South & East. Further accumulations will occur.

A Status Orange Snow-ice Warning is in place for Cavan, Monaghan, Donegal, Leitrim, Mayo, Roscommon and Sligo. It is also valid until 6am.

Continuing very cold with scattered outbreaks of sleet & snow. The snow will be heavy & persistent across the S&E. Further accumulations will occur. Ulster & Conn will have good dry spells & the snow will turn to sleet in some coastal areas of the S&E. Strong E'ly winds. 0 to 3°C pic.twitter.com/XLfc9Br51T

See counties affected by the orange and red warnings on the map: https://t.co/9BeK3UcAwO pic.twitter.com/sOxrwMALK2

Continuing very cold and overcast with scattered outbreaks of sleet and snow. The snow will be heavy and persistent across the south and east. Further accumulations will occur. Ulster and Connacht will have good dry spells and the snow will turn to sleet in some coastal areas of the south and east. Easterly winds will be strong and gusty. Highest temperatures zero to +3 degrees.

Tonight will continue very cold. There'll be further outbreaks of snow especially over the midlands, north and eastern counties, but it will be mostly of rain further south. Dry spells too. Minimum temperatures zero to -3 degrees coldest inland. A sharp frost and icy patches widely. Fresh east winds.

Tomorrow Saturday will be another mostly cloudy day. Outbreaks of sleet widely, but still with the chance of snowfalls over high ground and in the north. Precipitation increasingly as rain by afternoon. Fresh east winds. Highest temperatures ranging from 2 in the north to 6 or 7 degrees in the far south.

Sunday: The cold weather continues through the rest of the weekend with highest temperatures during Sunday only around 2 to 4 degrees. There will be a good deal of dry weather across the south of the country but wintry showers or some showery rain will affect more northern counties. Widespread frost overnight.

Monday: Still cold but with a slight rise in temps to around 4 to 6 degrees. There will be a lot of dry weather through the day, but some occasional showers will still occur. Frost in many places overnight.

Tuesday: Wintry showers will again affect more northern counties but many southern parts will remain dry for a good deal of the day. Remaining cold but temperatures continuing to show some improvement; highs of 3 to 7 degrees.

Thursday / Friday: Cold and frosty with occasional wintry showers; highs of 4 to 7 degrees.