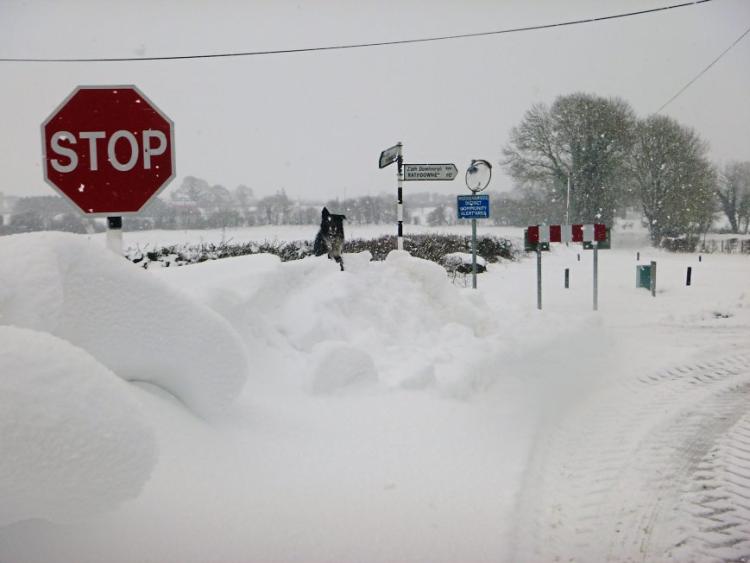 This picture was taken at Rathmakelly Cross Ballacolla where the road had been completely blocked by a snow drift before been cleared by locals. Pic from Michael G Phelan

A Storm Emma Status Red remains in place for Dublin, Kildare, Wexford and Meath while Laois and several other counties are not out of the woods yet and remain under a Status Orange alert.

Met Éireann warns there will be further snow tonight, heaviest & most persistent over eastern & southern counties & the south west. Towards dawn, the snow will turn more to rain along the southeast coast.

Up to 54 cms of snow was recorded as having fallen in Wicklow.

In her weather forecast on RTE tonight forecaster Siobhan Ryan warned that there are fears that the situaition could worsen in Dublin and particularly in the south east.

Authorities in Laois have warned people that roads remain hazardous and people should not travel. Roads will be hit by hard frost overnight.

While temperatures will rise over the weekend and rain is expected, temperatures are likely to remain low into next week nationwide as the Siberian air lingers over Ireland.

There'll be further snow tonight, heaviest & most persistent over eastern & southern counties & the south west. Towards dawn, the snow will turn more to rain along the south coast.
Fresh to strong E to NE winds, with some further coastal flooding- this mainly along the east coast pic.twitter.com/uxiuKvWZli

Very cold and icy overnight. There'll be further outbreaks of snow at times, heaviest over eastern and southern areas. Towards dawn, the snow will turn more to rain and sleet along the south coast. Some dry periods overnight too - best over northern and northwestern areas. Lowest temperatures zero to -3 C., coldest inland. Fresh to strong east to northeasterly winds, with some further coastal flooding- this mainly along the east coast.

Some snow on Saturday morning, mainly over the northern half of the country. But a band of rain and sleet over south Munster, will edge further northwards through the day, but some sleet and snow will continue to affect Ulster in the afternoon. Top temperatures 1 to 3 C., over Ulster, but 4 to 7 C., elsewhere, best along the south coast.

Sunday: The cold weather continues through the rest of the weekend with highest temperatures during Sunday only around 2 to 4 degrees. There will be a good deal of dry weather across the south of the country but wintry showers or some showery rain will affect more northern counties. Widespread frost overnight.

Monday: Still cold but with a slight rise in temps to around 4 to 6 degrees. There will be a lot of dry weather through the day, but some occasional showers will still occur. Frost in many places overnight.

Tuesday: Wintry showers will again affect more northern counties but many southern parts will remain dry for a good deal of the day. Remaining cold but temperatures continuing to show some improvement; highs of 3 to 7 degrees.

Thursday / Friday: Cold and frosty with occasional wintry showers; highs of 4 to 7 degrees.