Heavy rain and frost - a May weather weekend in Ireland 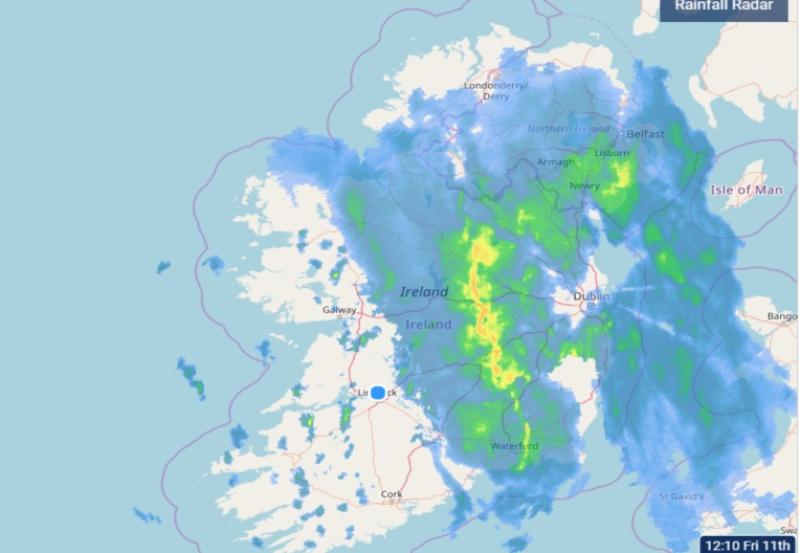 Heavy rain in Laois to be followed by cold night.

Hope you made the most of last weekend's sunny interlude because we're back into a cycle which includes frosty nights, heavy rain and wind according to the Met Éireann forecast.

Wet and windy weather is the feature of Friday's weather with some heavy bursts of rain in places.

Fortunately, drier and brighter weather, with a mix of sunshine and showers, will gradually extend eastwards over the country this afternoon and evening. Fresh to strong and gusty south to southeast winds veering to an occasionally gusty southwesterly as the rain clears. Highest temperatures 9 to 13 degrees.

The clearance into Friday night will bring another unseasonal twist in the weather.

It will be mainly dry with clear spells at first tonight, and just isolated showers. Later in the night, however, scattered showers will develop along the south coast and these will extend inland to affect southern parts of Munster and Leinster by morning. With light winds it will turn cold.

Minimum temperatures will range zero to 4 degrees leading to a touch of grass frost. A few mist and fog patches will develop also.

Saturday, will bring a mix of sunny spells and showers after a chilly start. Most of the showers will affect the southern half of the country during the morning, but they will become more widespread during the afternoon, and some of the showers will be heavy with a risk of hail and thunder. Highest temperatures of 11 to 14 degrees in light southerly or variable winds.

It will become mainly dry on Saturday night, though showers may continue in western coastal areas. It will turn cold with lowest temperatures of 2 to 5 degrees giving a touch of grass frost and some shallow fog. Winds will be light.

Sunday will start mainly dry and bright with some sunshine. However, showers will develop again in the afternoon and a few will be heavy. Highest temperatures of 12 to 14 degrees in just light breezes. The showers will die out early Sunday night and another cold night will follow with some grass frost.

Monday is looking mainly dry at the moment and with a bit of sunshine and light winds temperatures will rise to values between 14 and 18 degrees.

Tuesday will start mainly dry and bright, but rain is likely to develop later in the day. Temperatures in the east may reach 17 or 18 degrees but it will be cooler in the west.

Indications are that Wednesday will be a mainly dry and sunny day. It will be a bit cooler countrywide with highest temperatures of 11 to 14 degrees.