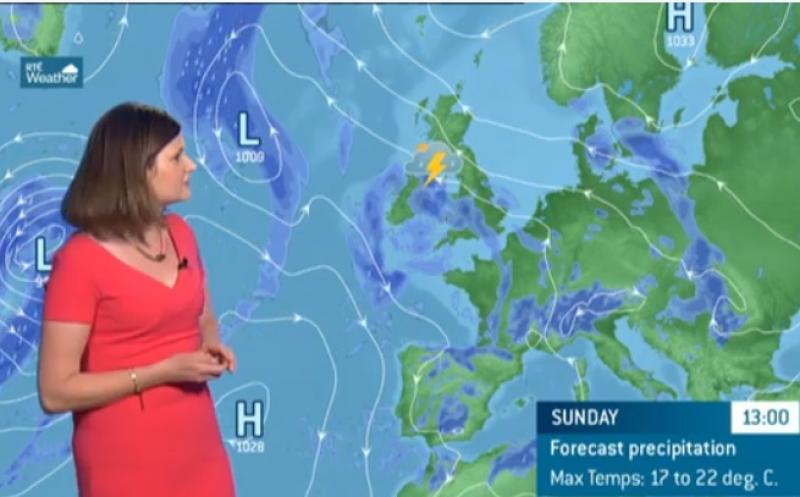 Weather warning for heavy rain issued by Met Éierann but temperatures to get warmer with sunshine also.

After a largely dry Saturday, the forecaster has warned that rain is set to sweep the country overnight and into Sunday.  But it also said the temperatures will not rise

The Status Yellow - rainfall warning has initially been issued for Kilkenny, Wexford, Cork and Waterford.

The forecaster said heavy thundery downpours are expected at times during Saturday evening/overnight, with the potential for torrential downpours in short periods leading to spot flooding.

Rainfall amounts of 25 to 40mm expected in places. The warning is valid from 9pm Saturday, May 26 to 6am Sunday, May 27.

The forecast is for a mostly cloudy start on Saturday, but some hazy sunshine will break through as the day progresses. A few scattered showers, mainly over Munster, but a lot of dry weather overall.

But in the evening, a band of heavy, prolonged showers will move into southern and southeastern coastal counties, giving some very heavy or thundery bursts of rain before nightfall. Top temperatures 20 to 22 C., generally, but in the high teens in some coastal areas. Moderate northeast winds will be fresh in some coastal areas.

The outlook is for even warmer weather over the coming days as continental air continues to feed in across Ireland. A lot of dry, bright weather generally with light to moderate easterly breezes, however as the humidity increases, so too will the threat of scattered thunderstorms.

Sunday will again be warm and humid with highest temperatures typically ranging 18 to 22 or 23 degrees Celsius, warmest across central and northern areas. Some southwestern counties will experience slightly lower maxima with onshore breezes. Scattered showers for a time early on but they will tend to become more isolated with spells of sunshine through the day, all in near calm. Thundery showers may move in across eastern counties around nightfall though.

Monday and Tuesday will be very warm with temperatures in the low to mid-twenties generally. Mostly dry and sunny with light easterlies, however, some thundery showers will once again break out in parts, with southern counties most at risk of seeing these.

The trend is for a similar regime to follow for another couple of days.