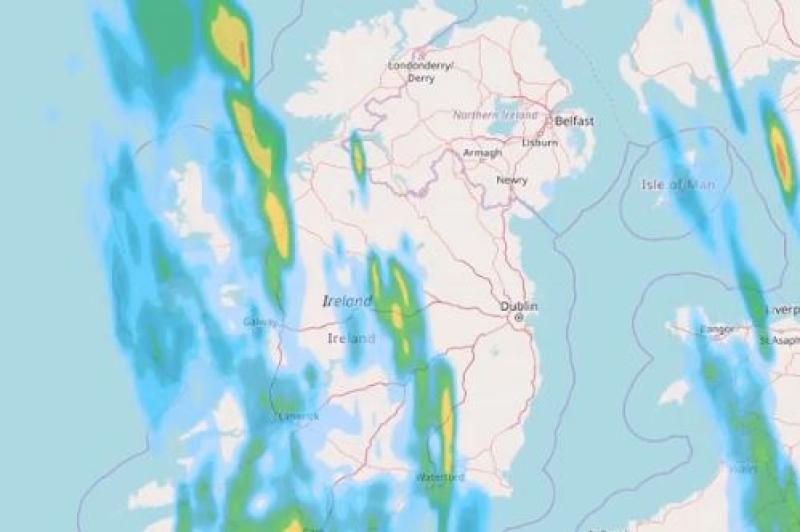 Met Éireann has issued a Status Yellow rainfall warning for 15 counties including all counties in Leinster.

Leinster, Cavan, Monaghan, Donegal and Waterford will all be affected as thundery downpours may lead to rainfall accumulations of 25-40mm.

The warning is in place until 9am tomorrow.

WEATHER 'above normal' rain in the Met Éireann weather forecast.

TODAY - FRIDAY 27TH JULY
Mostly cloudy with outbreaks of rain and drizzle in the east this morning. A band of showery rain along the west will spread further inland this afternoon turning heavy or prolonged with the risk of thundery downpours later in the afternoon or evening. Top temperatures 17 to 21 degrees in light to moderate south to southeasterly breezes but fresh near coasts.

TONIGHT - FRIDAY 27TH JULY
Tonight showery rain will be heavy at times with thundery downpours which will slowly track northeastwards with somewhat clearer conditions spreading into the southwest later. The rain will be persistent and heaviest in the east and later in the north. Lowest temperatures of 9 to 13 degrees in light to moderate southeasterly winds at first gradually becoming west to northwesterly and freshen later.

TOMORROW - SATURDAY 28TH JULY
Tomorrow, Saturday, showery rain will linger in the north for much of the day. However, elsewhere will see sunny spells and scattered showers. It will be a cooler and fresher day with top temperatures of just 15 to 18 degrees in moderate to fresh westerly winds, but strong and gusty in the in the north.

NATIONAL OUTLOOK
A marked change to a more mobile Atlantic regime in the coming days, with low pressure dominating conditions.

Most of the country will be dry at first on Saturday night but heavy rain or showers will move up over the country overnight, with particularly heavy falls possible in the east and southeast in the second half of the night. Lowest temperatures will be between 9 and 13 degrees from north to south and winds will be mainly light to moderate from a variable direction, becoming northwesterly by morning.

Further rain on Sunday morning in Ulster but then it will clear away and it will become drier generally for a time in the afternoon, with sunshine and scattered showers through the day, with most frequent showers occurring in the northwest of the country. Highest temperatures of 19 to 21 degrees with moderate west to southwest winds.

Monday will be fair at first but showers in the west in the early part of the day will become more widespread as the day goes on. Winds will be from the southwest bringing temperatures typical for the time of year.

The days out to midweek will be similar, with southwest winds dominating, but the current signal is for a gradual rise in temperatures once again, although there will still be showers for most days.