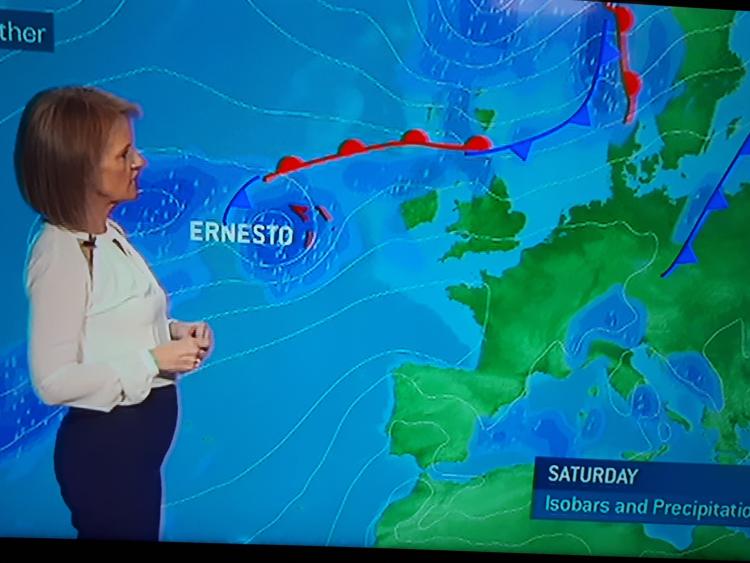 An tropical storm called Ernesto is on track to strike Ireland in the coming days bring plenty of rain and warm weather as it arrives, according to Met Éireann.

In her latest forecast on RTÉ Met Éireann's Joanna Donnelly said the storm is set to merge with normal Atlantic rain bringing rain and fresher winds across the country.

While it will become an ex-tropical storm as it approaches it will push temperature 25 degrees on Saturday because of its tropical origins. The rain will sweep the country on Saturday night clearing on Sunday.

FRIDAY 17TH AUGUST
Cloudy and breezy tomorrow with rain in many areas, persistent and locally heavy across the north of the country during the morning, but well scattered in the south. The rain will tend to die away in many places later in the afternoon and evening with good dry periods developing, but showery rain will continue to affect parts of Ulster, Connacht, north Leinster. Highest temperatures of 16 to 20 degrees Celsius, highest in the south.

NATIONAL OUTLOOK
Friday night: Humid overnight, with temperatures unlikely to fall below 13 or 14 C. Rather cloudy and misty overall, with a few patches of drizzle.

Saturday: Mainly dry at first, just patchy drizzle in the northwest. However, heavy rain will develop later in the day along the Atlantic Seaboard and will become widespread early Saturday night. Becoming humid and warm with top temperatures of 18 to 20 degrees in the west and north, and between 20 and 25 degrees over Munster and Leinster. A very humid night will follow with lows of 15 to 17 degrees. It will become breezy also in the night, with fresh and gusty south to southwest winds, which will be strong in some coastal areas.

Sunday: Another humid day, with temperatures in the high teens or low twenties. Some rain, mist and low cloud in the morning, but turning drier and brighter during the afternoon and evening in most places. Misty overnight, with drizzle at times. Lows of 11 to 14 degrees.

Monday: Largely dry and bright at first with sunny spells. Rain is expected to move in from the Atlantic during the second half of the day. Still quite warm and humid with highest temperatures of 18 to 22 degrees.

Trend: Mild at first, but with some rain at times on Tuesday. Fresher conditions are indicated through the midweek period, with sunny spells and just well scattered showers.