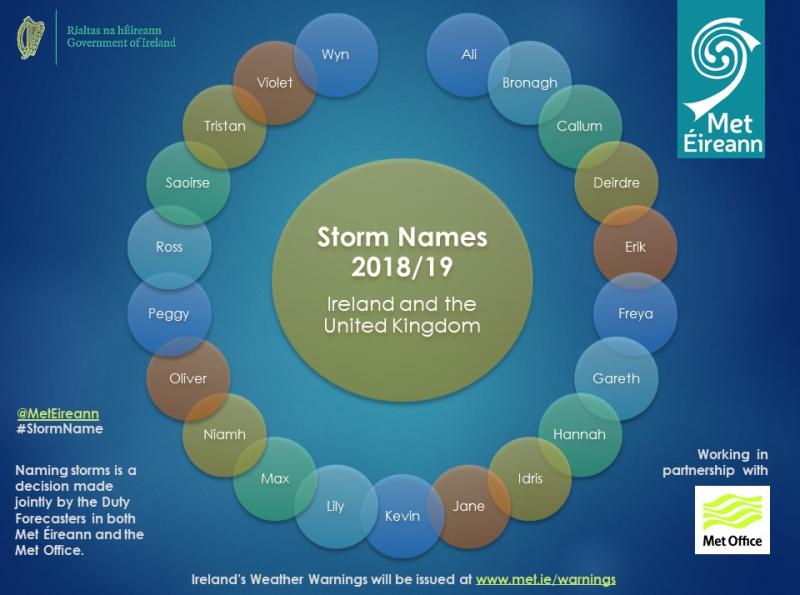 The arrival of Storm Ali marks the start of the 2018 / 19 storm season and weather forecasters in Ireland and the UK have given names to the weather events to raises awareness of severe weather before it hits.

First introduced in 2015, this is the fourth year Met Éireann and the UK Met Office have jointly run the ‘Name our Storms’ scheme.

Evelyn Cusack is Head of Forecasting at Met Éireann.

“The last 12 months have seen some extreme weather around the Globe as well as here at home. While it is too early to say whether the coming winter will be a stormy one or a quiet one we are prepared with a new set of 21 names for whatever nature may throw at us. Met Éireann is delighted to continue working with colleagues from the UK Met Office to warn of impending severe weather,” she said.

“Naming storms has been proved to raise awareness of severe weather in the UK and Ireland, providing a consistent message to the public and crucially prompting people to take action to prevent harm to themselves or to their property,” he said.

A storm is named for weather systems which are likely to give rise to Orange (Amber) or Red wind warnings by Met Éireann and/or the Met Office.

This season’s names have once again been compiled from a list of suggestions submitted by the public, choosing some of the most popular names but also selecting names that reflect the culture and diversity of Ireland and Britain.  As in previous years, Q, U, X, Y and Z will not be used, to comply with the international storm naming conventions.

Here’s a reminder of the named storms since last September.

Evelyn is chair of the European group for storm-naming which feeds into a worldwide system of naming storms, hurricanes, typhoons etc. She points out that the names of the two most serious events affecting our shores over the last year, Ophelia and Emma, actually did not come from our 2017-18 list.

Ophelia is from the rotating list used by the National Hurricane Center in Miami and was the farthest-east major hurricane observed in the satellite era. Emma was named by the National Weather Service in Portugal (IPMA) and produced heavy snow as it clashed with the Arctic conditions over Ireland and Britain in early March this year.