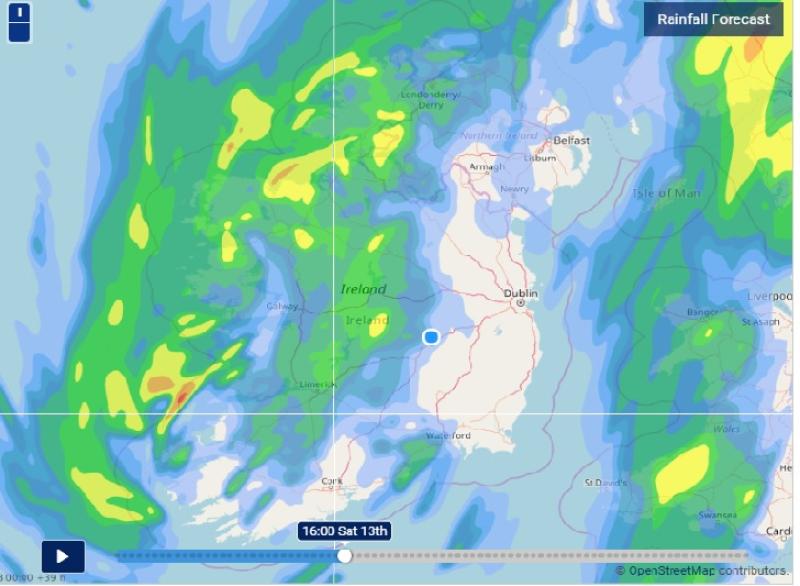 Storm Callum will be followed by a weekend of unsettled weather with 'heavy bursts of rain' the feature on Saturday,  according to the latest Met Éireann forecast.

Rain will move in to affect the south and east for a time, before clearing eastwards later this afternoon. Mostly dry further north and west but there will be some showers, and there is the risk of some prolonged showers spreading in later. Maximum temperatures of 12 to 16 degrees in strong to gale force southerly winds.

Clear spells and scattered showers early on Friday night will be followed by rain moving in across the south and east later in the night, extending to most of the country by dawn on Saturday. The rain will turn heavy and persistent with some spot flooding possible. Winds mostly moderate southeasterly tonight but remain fresh to strong in some coastal areas. Minimum temperatures of 9 to 12 degrees.

Saturday will be cloudy and wet across the bulk of the country on Saturday with outbreaks of rain. The rain may ease for a time in the east during the afternoon but remain damp with patchy drizzle and mist. Further heavy bursts of rain will then extend from the west during the evening. Winds generally light to moderate northerly or variable in direction on Saturday but strong northwesterly winds will develop in the southwest during the afternoon, extending to all areas during the evening. A cool day with maximum temperatures of 10 to 13 degrees.

The outlook is for a time on Saturday night, especially in the north, the rain clearing through quickly and once again most places dry by morning. Lowest temperatures will be 5 or 6 degrees and winds will be fresh northwesterly, backing westerly and moderating later.

Sunday will be mostly dry to start with good sunshine for the morning, and scattered showers developing for the afternoon. Temperatures 11 or 12 degrees with mainly moderate southwest winds falling light southerly later. Lowest temperatures Sunday night about 5 or 6 degrees.

Monday is looking dry but there's uncertainty on this due to unsettled and mobile conditions, so the timing of the arrival of any rain may vary. Temperatures will return to mainly normal for the time of year with light to moderate southerly winds, freshening from a south to southeasterly direction later as another spell of rain arrives Monday night.

Tuesday will see rain in the morning clearing to showers in the afternoon. The further outlook is for continued unsettled conditions with rain at times, with temperatures around normal for the time of year.