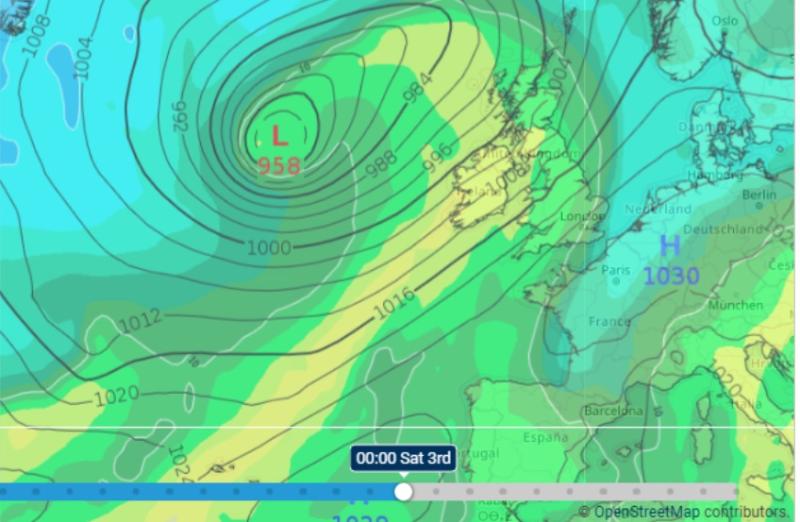 Ex-Hurrican Oscar could cause disruption.

A 'vicious looking' weather front is on the way according to weather forecasters with Met Éireann issuing an early weather warning about the potential impact of ex-Hurricane Oscar.

Forecasters are expecting strong winds and heavy rain on Saturday but the forecast is uncertain for Sunday. A storm status has yet to be declared.

Forecasters in the Met Office in the UK, Met Éireann's partner, have said a hurricane in the Atlantic could influence the impact of a 'vicious looking' system in the Atlantic.  MORE HERE

At present, Met Éireann says it looks as through frontal zones associated with post tropical storm Oscar will start to push in over Ireland on Friday. Moist tropical maritime air will be transported northeastwards over the country during Friday and temperatures on Friday evening look likely to be up around 12 to 14 degrees Celsius – this despite widespread rain with some heavy falls, and blustery southerly winds. Current indications suggest that the strongest winds associated with post-tropical Storm Oscar will likely be in coastal regions of the west and northwest during Saturday, with gales or potentially strong gales in those sea areas.

Meteorologist commentary compiled Tuesday on Hurricane Oscar: https://t.co/TblCnzsDIs
Latest data from the U.S. National Hurricane Centre can be found here: https://t.co/NPb9hoXWnK
An animation of our 7 day Atlantic charts for pressure and rainfall including Oscar is below pic.twitter.com/XxPlxSMK5O

TOMORROW - THURSDAY 1ST NOVEMBER
Tomorrow, Thursday will be dry in most areas. Mist and fog will clear during the morning and good sunny spells will develop. There'll be some scattered showers in the west and northwest. Highest temperatures of 6 to 9 degrees with light west to northwest breezes.

Mostly cloudy on Friday with rain in west and southwest, spreading eastwards to all areas during the day. Becoming milder as the day goes on and becoming quite windy as well with fresh to strong southerly winds. Friday night will see further outbreaks of rain and it will stay mild and windy overnight.

A wet and windy start for many on Saturday, potentially very windy in the west and northwest with gales likely in coastal fringes of Connacht and west Ulster. The rain will clear eastwards during Saturday with showers following behind into western areas for the afternoon. Southwesterly winds will gradually abate through the course of the day but it looks like it will stay windy in the northwest through much of Saturday night.

On Sunday rain is likely to spread from the southwest across the country, but the details are still uncertain at this stage.