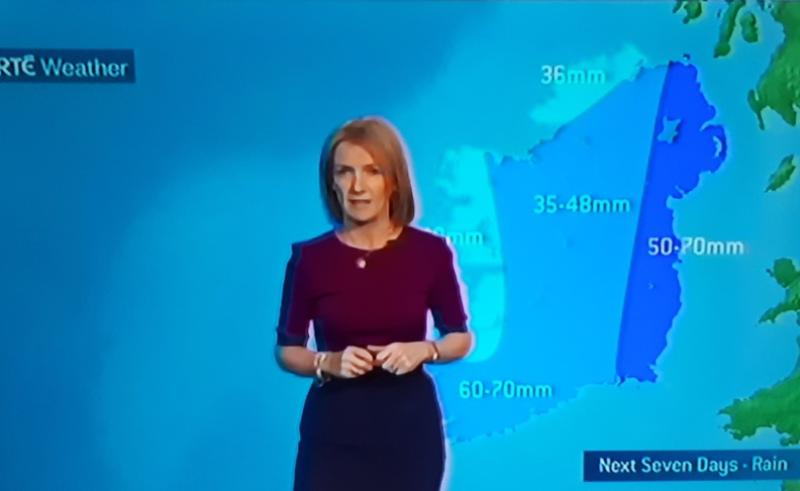 A Met Éireann rain warning for Leinster counties marks the start of a 'very unsettled' week of weather with 'heavy rain' causing flooding according to the forecaster.

A Status Yellow Rainfall warning is in place for Carlow, Kilkenny, Wexford, Wicklow and Waterford. Heavy rain of 20-30mm expected overnight Sunday from 9pm to 9am Monday.

While five counties are covered by the warning, Met Éireann says the rain along the southeast coast will extend through most of Munster and Leinster the evening and tonight, with some heavy bursts in the southeast.

In her weekly farming forecast on RTÉ, Joanna Donnelly said it will be a week of wet weather with up to 70mm across the next seven days.

There will be further rain on Monday morning, heavy in places, especially in southeast and eastern areas, with an ongoing risk of spot flooding. But the rain will turn lighter and more intermittent during the afternoon, with some dry spells developing

Met  Éireann is warning of very unsettled weather for the rest of the week, with occasional rain, much of it heavy. Rainfall will be well above normal, especially in southeastern and eastern areas, with a risk of some spot flooding. Windy at times also, but temperatures will be a degree or two above normal, with very little frost at night. MORE FORECAST BELOW TWEET.

There will be further outbreaks of rain in the east and northeast on Monday, but it will be mild here and the rain will largely clear by morning. The rest of the country will be mostly dry at first, but cold, with minimum temperatures of 3 to 5 Celsius. Becoming milder by morning, with rain developing in the southwest and along the west coast, accompanied by freshening southeasterly winds.

Windy, with outbreaks of rain extending from the west and southwest to all areas during the morning and early afternoon Tuesday. There will be some heavy bursts, especially in southern coastal areas, with a risk of spot flooding. Max. 10 to 13 Celsius, in fresh and gusty southeasterly winds. Clearer, more showery conditions will extend gradually from the Atlantic during the afternoon and evening and winds will veer southwesterly and slacken. There will be further rain or showers on Tuesday night, mainly in coastal areas. Min. 2 to 7 Celsius, coldest in parts of Munster and inland parts of Connacht.

Wednesday will bring some bright spells, but mostly cloudy, with occasional showers or longer spells of rain. Cool, with max. temperatures of 8 to 12 Celsius, in a mostly moderate west or southwest winds. Wednesday night will have further showers, mainly near coasts. Cold. Min. 2 to 5 C.

Thursday onwards will remain very unsettled and changeable, with showers or longer spells of heavy rain at times, but dry, bright spells also, with temperatures remaining a little above normal.