The amount used on Laois roads was double previous winter 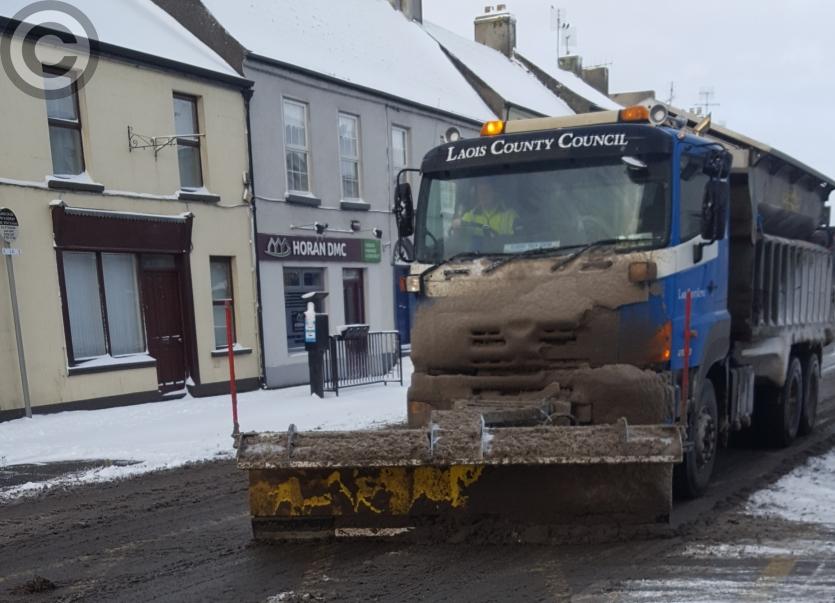 Storm Emma, the Beast from the East and other freezing snowy weather led to Laois County Council using thousands of tonnes of extra salt for roads last winter.

Laois County Council figures reveal that the amount needed in 2017/18  was double the amount used during to the previous winter. It was some seven times the total tonnage the council starts the gritting season with.

"The winter maintenance season runs from mid-October up until the end of April and in the 2017/2018 season, Laois County Council carried out over 100 treatments compared with less than half this number over the previous winter.

Mr Kehoe said a full salt stock is available for use on roads ahead of the 2018/2019 winter maintenance season, with 600 tonnes of dry salt supplies currently in stock.

He said that, as in previous years, this would be used for the treatment of priority 1 & 2 routes in accordance with the 2018/2019 Winter Maintenance Plan.

Mr Kehoe said salt storage quantities are monitored on a weekly basis and stocks can normally be replenished in less than 48 hours.

The council revealed the demands on its resources after the Minister for Transport, Tourism and Sport Shane Ross announced that he has secured additional funding for salt stocks as part of his Department’s preparation for winter 2018-19.

Minister Ross was speaking the launch of the Partnership Governments 2018-19 be “Winter Ready” campaign at the National Emergency Coordination Centre in Dublin today.

“As Minister for Transport, I am very concerned about safety on our roads, especially in hazardous conditions. Studies show that the use of road salt reduces collisions by up to 85% during a winter event.

"Last year’s salt reserves were seriously depleted by Storm Emma. Therefore this year I have secured an additional €700,000 in funding for salt supplies in preparation for severe weather events," he said.

He also warned that speeding, particularly in wintry conditions, can be treacherous.