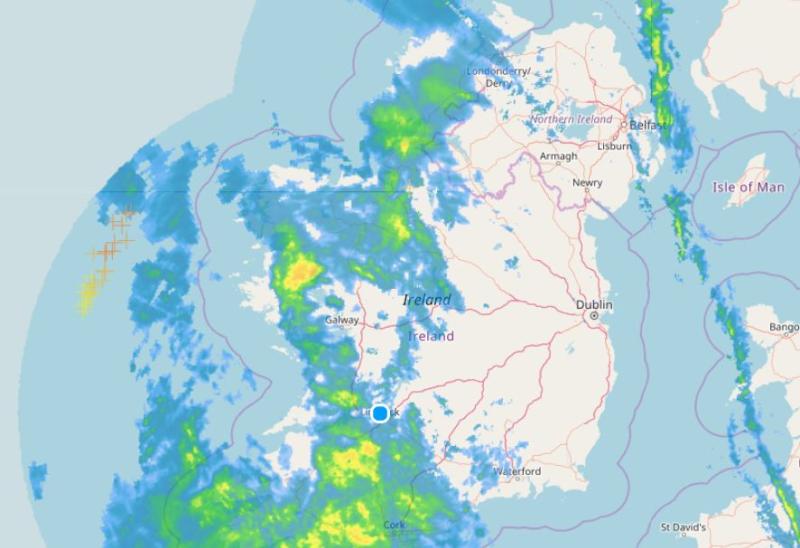 The whole country is in for some wet and windy weather on Friday as and Met Eireann has three different Status Yellow weather warnings in place.

A Status Yellow rainfall warning is in place for all of Ireland as heavy rain will lead to accumulations of around 25 to 40mm or more in mountainous areas.

The Met Eireann forecast is wet and very windy for Friday. Outbreaks of heavy rain across the west of the country will extend north-eastwards to remaining areas by early afternoon. The rain will be accompanied by strengthening southeasterly winds which will increase gale to strong gale force along exposed coasts. A few thundery downpours are likely which may lead to temporary surface flooding. Top temperatures will range 9 to 13 degrees.

Rain will clear from east Ulster early on Friday night to leave a mix of clear spells and showers. The showers will be frequent near western and southern coastal areas but more isolated elsewhere. Gale force southeasterly winds will veer southwesterly and decrease moderately to fresh. Minimum temperatures of 4 to 7 degrees.

Saturday will bring a mix of sunny spells and showers. The showers will be frequent across the south and west but more isolated elsewhere. Maximum temperatures of 8 to 11 degrees in moderate to fresh south or southwest winds.

Friday will start dry, but wet and windy weather will spread from the west during the morning to all parts. The rain will turn heavy in the second half of the day with spot flooding likely. Southeast winds will be strong and gusty with gales or strong gales on exposed coasts. Highest temperatures of 9 to 11 degrees.

The last of the rain will clear the north early on Friday night and scattered showers will follow. Later in the night it will become largely dry. Winds will veer southwest and moderate early tonight as well. Lowest temperatures of 4 to 6 degrees.

SUNDAY AND NEXT WEEK

Further sunny spells and scattered showers are likely on Sunday, the showers most frequent in the western half of the country with a slight risk of hail and thunder.

In the west, the showers may merge into longer spells of rain. Southerly winds will freshen a little during the afternoon. Maximum temperatures of 9 to 12 degrees.

Early next week: Sunshine and showers on Monday with temperatures close to normal. A good deal of dry weather Tuesday but rain will spread from the west later Tuesday night.

The rain may linger for a time next Wednesday and it will become quite mild.