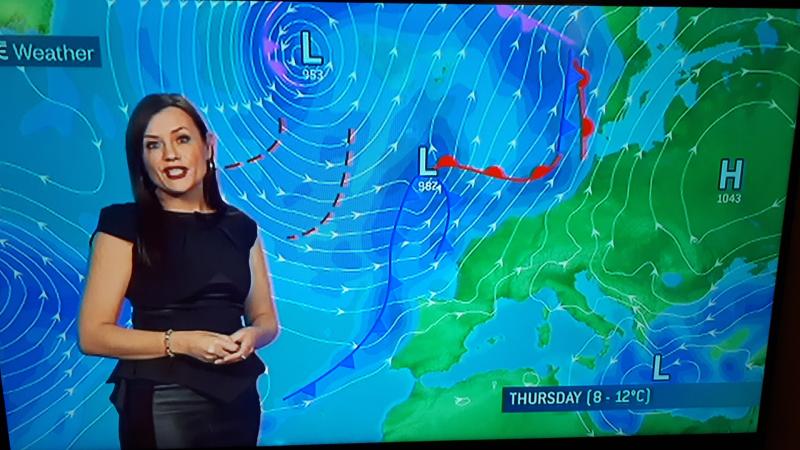 The brief respite after Storm Diana is set to be followed by a 'swipe of heavy rain' is set to make for a difficult morning Thursday morning commute, Met Éireann has warned.

In her nightly forecast after the RTÉ news, meteorologist Siobhan Ryan said a very wet morning is on the cards, especially for Leinster.

She said a developing front to the north of Spain and Portugal is going to track towards Ireland overnight Wednesday into Thursday.

"It is going to deliver a swipe of heavy thundery rain for the south and east of the country with spot flooding highly likely and not making for a pleasant commute for the early morning rush hour," she said.

While it will pull away quickly towards Britain, heavy showers will be a feature of Thursday with some of hail and thunder.

TOMORROW - THURSDAY 29TH NOVEMBER
Rain will gradually clear the east coast tomorrow morning as brighter weather extends countrywide. Showers will become fairly widespread but will be more frequent over the western half of the country. A blustery day with southwest winds and highs of 8 to 12 degrees.

Thursday night: Fairly widespread showers at first on Thursday night but the showers will become largely confined to western and northern counties later in the night. Blustery overnight with strong southwest winds. Minimum temperatures 4 to 7 degrees.

Friday: Friday will be a cool, bright and blustery day with sunny spells and scattered showers becoming more widespread in the afternoon. Some of the showers will be heavy and prolonged in the northwest. Some of hail with a risk of isolated thunderstorms. Afternoon temperatures will range from 6 degrees Celsius in northern counties to 9 or 10 degrees Celsius in parts of southwest and along the south coast. Windy at first in strong and gusty southwest to west winds but winds will ease off in the afternoon.
A spell of persistent and heavy rain looks set to extend from the Atlantic later in the evening and overnight.

Saturday: Overnight heavy rain clearing eastern and northern coastal areas in the early morning and the day will be bright with a mix of cloud and sunny breaks. There will be a good deal of dry weather, but some scattered showers. Afternoon highs of 7 to 10 degrees Celsius, highest near the south coast. Turning wet on Saturday night as persistent and at times heavy rain spreads northwards.

Sunday: Current indications suggest cloudy conditions with rain at times on Sunday but some drier periods also. The rain will turn more persistent in western areas later Sunday and more widespread rain is expected overnight. Afternoon temperatures will range from 7 degrees Celsius in northern parts to 12 or 13 degrees Celsius in the south and winds light easterly early in the day in northern counties, will become moderate to fresh southwesterly in all areas later.

Early next week: Unsettled weather expected through the early days of next week and colder over the northern half of the country especially with night frosts.