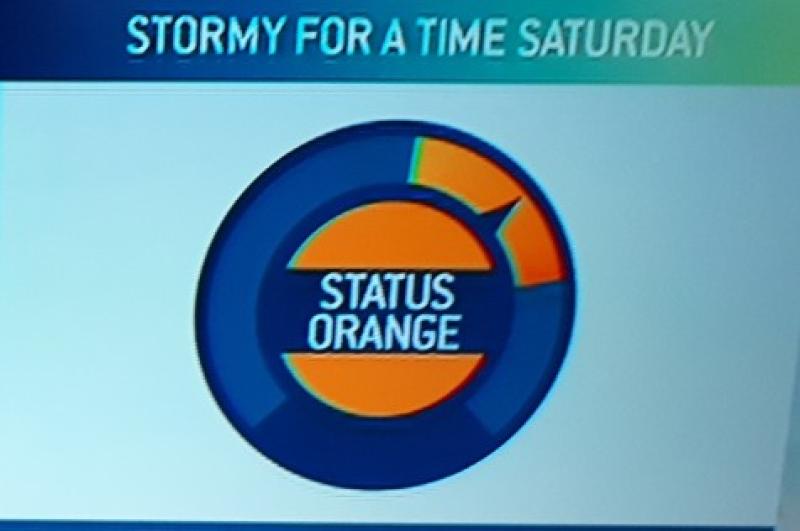 Met Éireann has issued another update for Storm Deirdre which has caused flooding and other damage around the country.

The forecaster tweeted its latest timeframe for its Status Orange wind weather warning for the storm.

It has removed the Status Orange warning for some parts of the country but they have been replaced by Yellow Warnings.

The Status Orange Wind warning is in place for Wexford, Donegal, Cork and Waterford. West to northwest winds mean speeds 55 to 70 km/hr gusts to 120 km/hr are expected for a time this afternoon and early evening, strongest in coastal areas.

It is valid until 10pm on Saturday.

Met Éireann forecasts that southeast winds will veer west to northwest later this afternoon and evening, with mean speeds 55 to 65 km/hr and gusts to 110 km/hr.

The warning is valid until 10pm Saturday 15.

The Status Yellow Rainfall warning for Ireland forecasts heavy rain leading to accumulations of 30 to 50mm with some mountainous areas exceeding these limits.

It is valid to just before midnight.

A Status Yellow Wind warning is in place for for Connacht, Clare, Kerry, Limerick and Tipperary. West to northwest winds, mean speeds 55 to 65 km/hr gusts to 110 km/hr are forecast until 7pm.

The forecaster says it will be extremely windy or stormy in eastern and northern areas early Saturday tonight, but the winds will soon abate. Clear spells and occasional showers overnight, some heavy in southern areas later, with a risk of hail and thunder. Turning cold; temperatures fall to between 1 and 4 C., with frost developing in places.

It is expected to be cold on Sunday with widespread rain or hail showers during the morning, some prolonged in places. Showers will be mostly in western and southwestern counties in the afternoon, with some better sunny spells in midland and eastern areas. Top temperatures of 6 to 8 C., in moderate or fresh southwest winds.