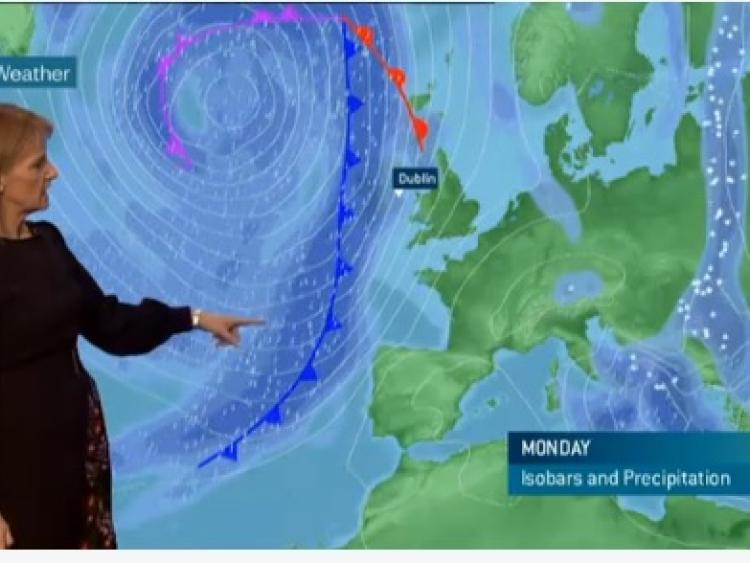 Met Éireann is forecasting a stormy start to a week of unsettled week of weather up to Christmas week.

Status Yellow weather warnings are in place for wind and rain on Monday running into Tuesday and the rest will bring more wet and cold weather to Ireland.

A dry and bright start in some place on Monday will be followed by cloud with rain spreading east afternoon. The rain will turn persistent and heavy in parts through the day and into the night with and strong to gale force winds into Tuesday morning.

Starting mostly dry & dull today with a few bright spells in the east. Cloudy in the west with outbreaks of rain & drizzle spreading eastwards during the morning & early afternoon. Southerly winds strengthening to gale force by this evening. 9 to 12 °C. Very heavy rain tonight. pic.twitter.com/o3dF3x6RTZ

A Status Yellow - Wind warning for Leinster, Cavan and Monaghan for south to southeast winds will reaching mean speeds at times between 50 and 65km/h and gusts between 90 and 100 km/h is valid from 7pm Monday, December 17 to 9am Tuesday.

A similar Status Yellow Wind warning is in place for Munster, Connacht and Donegal is valid from 1pm Monday to 4am Tuesday.

TODAY - MONDAY 17TH DECEMBER
This morning will start mostly dry with a few bright spells in the east. However, it will be cloudy in the west with outbreaks of rain and drizzle spreading eastwards during the morning and early afternoon. Later in the evening the rain will turn persistent and heavy in the west with the risk of spot flooding. Southerly winds will be moderate to fresh and gusty but during the afternoon winds will increase strong with gales developing near Atlantic coasts. Afternoon temperatures will be 9 to 12 degrees.

TONIGHT - MONDAY 17TH DECEMBER
Tonight rain will turn heavy in the west and slowly spread eastwards with the risk of spot flooding. South to southeast winds will increase further to reach gale force on all coasts. Later in the night winds will veer southwest and moderate over the western half of the country. It will be relatively mild overnight with temperatures of 8 to 11 degrees.

TOMORROW - TUESDAY 18TH DECEMBER
There will be heavy rain over Ulster and Leinster on Tuesday morning followed by a clearance from the west to scattered showers and some sunny spells later. Some of the showers will be heavy with the risk of hail or thunder, especially in the west. It will turn cooler with the clearance with afternoon temperatures of just 6 to 9 degrees. South to southwest winds will moderate to fresh but over the east winds will still be strong to gale force for a time in the morning.

NATIONAL OUTLOOK
Summary: Showery conditions for much of this week, some heavy or more frequent and with the risk of hail or thunder. However, a spell of persistent rain on Friday will clear later to scattered showers.

There will be scattered showers with clear spells on Tuesday night. The showers will be heavy and more frequent in the west and southwest. South to southwest winds will be light to moderate with patches of mist or fog forming. Lowest temperatures will fall to between 3 and 7 degrees with perhaps some grass frost in the east and north.

On Wednesday showery rain will affect the west with some heavy thundery bursts likely. Further east there will be scattered showers with some bright or sunny spells. Top temperatures will stay around 6 to 8 degrees in mostly moderate south to southwest winds, but strong and gusty near western and southern coasts.

Thursday will see scattered showers with some sunny spells. However, the showers will be heavy and more frequent in the northwest and north with the risk of the odd thundery downpour at first. But showers will ease and clear southeastwards later in the day. Top temperatures of 7 to 10 degrees. Fresh to strong and gusty west to southwest winds will veer westerly in the afternoon and moderate.

Thursday night will be mostly dry with clear spells at first. However, later in the night cloud will build from the southwest with a spell of persistent rain pushing into the southwest and becoming widespread by morning. Winds will fall light with patches of mist or fog forming. Lowest temperatures fall to around 1 to 5 degrees with some grass frost possible in the north.

Friday will start cloudy with a spell of persistent rain clearing northeastwards to more showery conditions with some sunny spells. Top temperatures of 7 to 11 degrees.

Saturday is likely to continue with showery conditions with some sunny spells. Top temperatures around 8 to 11 degrees in moderate southwesterly breezes.