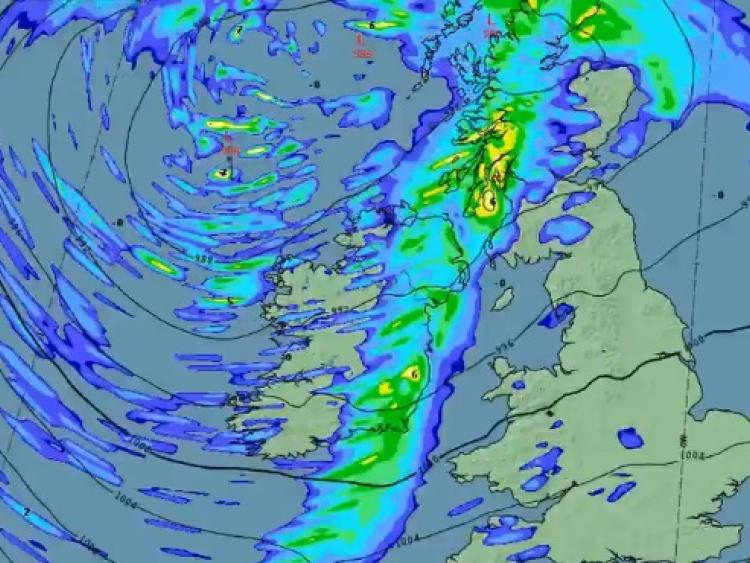 Met Éireann has extended weather warnings for all 26 counties with winds of up to 100 km/ph expected to hit on Saturday night.

The warning was extended to counties down the middle of the island on Saturday morning. The forecaster is also warning that wind and rain will be followed by a big drop in temperatures.

From early tonight and overnight the forecaster expects north to northwest winds to reach mean speeds of 50 to 65 km/hr with gusts of 90 to 100 km/hr.

The forecaster warns people to expect very strong north to northwest winds to reach mean speeds of 60 to 65 km/hr with gusts of 100 to 110 km/hr this evening and overnight. Met Éireann says wind may exceed these speeds in exposed coastal areas. There will also be very high seas.

Met Éireann has not declared storm status for the winds which will be followed by a big drop in temperatures. MORE FORECAST BELOW TWEETs

Have you got plans this #weekend? Check out the forecast as there will be #snow and strong winds for some areas ☃️️ pic.twitter.com/wFXLxUVDve

Persistent rain over the eastern half of Ireland will clear by early Saturday afternoon. Sunny spells and showers will follow from the west. These will become frequent, especially in the west with a risk of hail. Fresh southwest winds will veer west to northwest, becoming strong and gusty in the west. Becoming colder with afternoon temperatuers of 7 to 10 degrees.

TONIGHT - SATURDAY 26TH JANUARY
Tonight will be very windy with strong to gale force and very gusty north to northwest winds, strongest along west and north coasts with some severe gusts. Clear spells and squally showers, turning wintry in the west and north overnight. Cold with lowest temperatures of 1 to 4 degrees.

TOMORROW - SUNDAY 27TH JANUARY
Continuing windy at first on Sunday with fresh to strong, gusty northwest winds. Winds will gradually ease through the day. Sunny spells in many areas. Scattered showers also, mainly in Ulster. Outbreaks of rain will develop in the west in the evening. A cold day with highest temperatures of 4 to 8 degrees.

Sunday night will be cold with occasional showers - some of which may be prolonged and wintry in northern areas. Sharp frost and icy patches also.

Monday will be a bright cold day with good dry spells, but showers will occur widely too - especially across the north and west. Then Monday night will be very cold and wintry with occasional hail sleet and snow showers - again most frequent across the north and west with possible accumulations in places. Westerly winds will be fresh and gusty with a danger of icy roads.

Staying very cold with recurring wintry showers on Tuesday also - the north and west most at risk of accumulations. Sharp frost and ice will be a continuing hazard with sub zero air and ground night time temperatures. Fresh blustery west to northwest winds.

Temperatures will rise a little for Wednesday and Thursday as winds back to the southwest, but it'll continue very changeable with further showers and spells of rain. Wintry precipitation will be an ongoing risk, especially on high ground.