Met Éireann delivers the latest forecast on the risk of snow 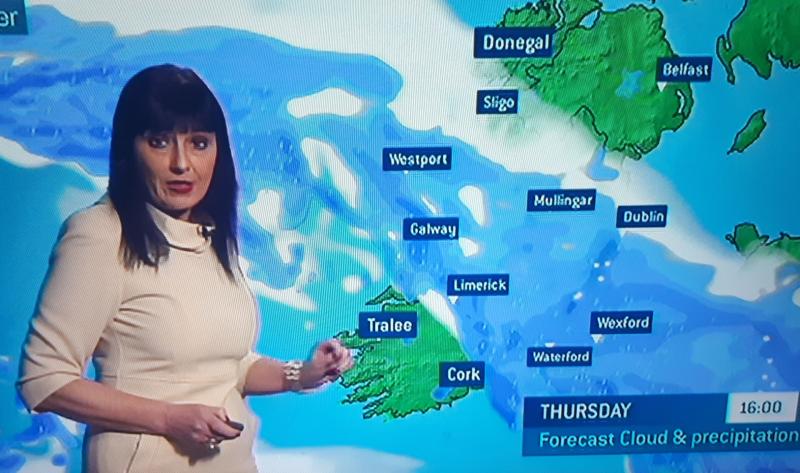 Rain rather than widespread snow looks more likely but it will remain very cold through to the weekend, according to the latest Met Éireann forecast.

In her bulletin, after the RTÉ news, meteorologist Jean Byrne said the low pressure on the way for the Atlantic is now likely to bring more rain than snow.

Some snow is on the cards for inland areas but mainly in mountains and high ground. Rain and sleet is more likely for most parts of the country. However, she said there would be a biting chilly wind on Thursday with temperatures climbing no higher than the high single figures.

It is expected to be brighter on Friday and Saturday but there will be widespread frost over the coming days.

The Status Yellow warning remains in place due to the cold weather with sub-zero temperatures most nights.

TONIGHT - WEDNESDAY 30TH JANUARY
Tonight will be mostly dry with good clear spells at first and just the odd wintry shower lingering in the northwest. It will be very cold with widespread severe frost and ice on untreated roads. Lowest temperatures will fall to between -2 and -5 degrees. Winds will be light southerly at first with widespread mist and fog and the risk of freezing fog in places. However, later cloud will increase from the west with outbreaks of rain pushing into part of the west and southwest before dawn. The rain will be preceded by sleet and snow on higher ground. Southeasterly winds will freshen towards morning and become strong and gusty along south and west coasts.

TOMORROW - THURSDAY 31ST JANUARY
Tomorrow, Thursday will be very cold and windy with outbreaks of rain spreading northeastwards, turning heavy or persistent for a time. The rain will turn to sleet or snow for a time over Connacht, Leinster and inland parts of Munster with the risk of snow accumulations over mountainous areas. Afternoon temperatures will reach just 2 to 5 degrees, but 6 or 7 degrees in the southwest. Southeast to easterly winds will increase strong and gusty and veer east to northeast later.

Thursday night: Very cold and frosty overnight with icy roads and also some lying snow. Frosty from the start over Ulster with some pockets of freezing fog. Windy for a time elsewhere with a mix of rain, sleet and snow. The snow is likely to be heaviest over much of Munster and south Leinster, with some significant accumulations in places. But this band of weather will clear southwards later in the night and the fresh and gusty east to northeast winds will moderate also. Icy here also with lying snow in places. Overnight lows generally below zero between -2 and -5 C., coldest over snow fields but zero or + 1 along the south and southeast coasts.

Friday: Very cold with moderate north or northeast breezes bringing some wintry showers to exposed coastal areas, mainly eastern and also parts of the northwest and west coasts. But most other areas, especially inland parts will be dry with spells of winter sunshine. Very little in the way of a thaw, with top temperatures generally 2 to 4 C., but up to 6 C., in some Atlantic coastal districts.
Bitterly cold overnight, with a severe frost and icy conditions. Lows of -2 to -4 C., generally, but lower over snow fields and perhaps around zero in some Atlantic coastal districts. Many places will be dry, but a few wintry showers are likely to affect coastal areas exposed to the moderate to fresh northerly breeze.

Saturday: Frost and ice clearing slowly in bright fairly sunny weather. A few light wintry flurries in coastal areas exposed to the moderate north to northwest breezes but most places dry. Top afternoon temperature 5 to 7 C., best in Atlantic coastal fringes.
Bitterly cold overnight with lows of -3 to -5 C., generally, but colder over snow fields. There will be a widespread severe frost overnight, with icy roads and some freezing fog can be expected also.

Sunday: Frost, fog and ice clearing gradually, with sunny spells through the morning. Cloud increasing from the Atlantic in the afternoon, with some light rain expected in coastal areas later. Staying cold, with highs of just 4 to 7 C., generally, but up to 7 or 8 C., along Atlantic fringes. A slight frost in eastern areas, but temperatures rising later as cloud and rain is expected to spread in across the country from the west.

Trend: Changeable and unsettled next week with some spells of rain at times. Temperatures around normal by day, but cool at night, with some frost in places.