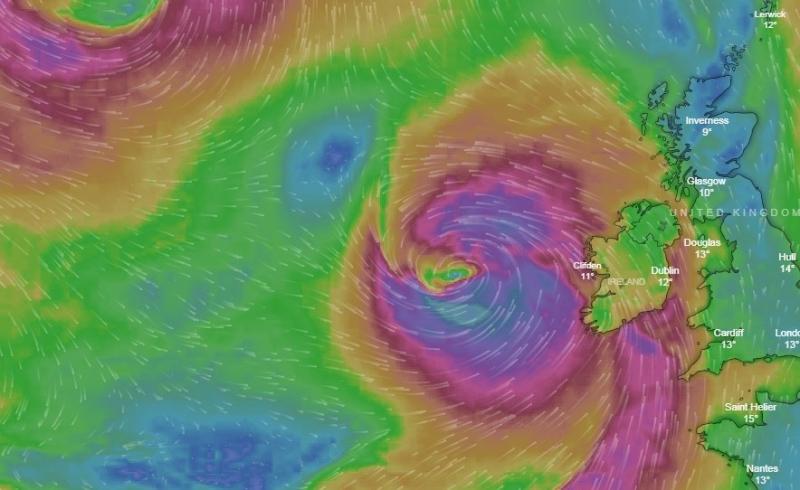 Storm Erik on the way.

Met Éireann has declared Storm Erik is to hit Ireland and raised its weather warnings to Status Orange for parts of Ireland.

The forecaster expects the Storm to hit on Friday bringing Status Orange winds of up to 130kmph to some counties. A Status Yellow warning remains in place for most of Ireland.

The Status Orange wind warning is in place for Galway and Mayo with Storm Erik expected to bring Southwest to west winds will reach mean speeds of 65 to 80 km/h with some severe or damaging gusts of 110 to 130 km/h.

The highest winds will be in exposed coastal areas, where these values may be exceeded at times. Very high seas as well with some coastal flooding.

The warning is valid from 5am to 1pm Friday, February 8

A similar Status Orange Wind warning for Donegal is valid from 9am Friday to 6am Saturday.

The Status Yellow - Wind warning for the rest of Ireland forecasts that Storm Erik will bring southwest to west winds that will reach mean speeds of 50 to 65 km/h with gusts of 80 to 110 km/h. Along exposed Atlantic coasts these values may be exceeded for a while and with very high seas this will give the risk of coastal flooding.

The warning is valid from 5am Friday to 6am Saturday.

Status Yellow: for all areas
Gusts to 110 km/h

TODAY - THURSDAY 7TH FEBRUARY
Today will be a bright, fresh day with sunny spells and showers. The showers will be mainly over the western half of the country with just isolated showers in the east. It will become cloudy from the southwest during the day, with persistent rain developing in the west and southwest towards evening. Highs of 7 to 10 degrees with moderate to fresh southwest to west winds.

TONIGHT - THURSDAY 7TH FEBRUARY
Outbreaks of rain will spread countrywide tonight. The rain will be persistent and heavy in places. Lows of 4 to 7 degrees will occur this evening and early tonight, with temperatures rising 7 to 10 degrees by the end of the night. Increasingly windy overnight, with south to southwest winds increasing strong to gale force and gusty by morning. Severe gusts are possible near Atlantic coasts towards dawn.

TOMORROW - FRIDAY 8TH FEBRUARY
Tomorrow Friday will be a very windy day with strong to gale force and gusty southwesterly winds gradually veering westerly. Potentially damaging gusts on the west coast through the morning and for much of the day on north coasts. After a mild and wet start to the day, drier, brighter and more showery conditions will extend to most places by the afternoon. Afternoon highs of 6 to 9 degrees.

NATIONAL OUTLOOK
Widespread blustery showers will continue on Friday night, and some of the showers will be heavy with a risk of hail and isolated thunderstorms. Lowest temperatures will stay around 4 and 7 degrees. Strong to near gale southwest to westerly winds, with gales or strong gales near the coasts, will slowly ease overnight.

Saturday will start windy with further scattered showers. The showers will be most frequent in the west and north, with an ongoing risk of hail and thunder, but they will gradually become more isolated towards evening. Highest temperatures will be around 6 to 9 degrees. Strong and gusty southwesterly winds will gradually abate. Showers will continue to affect Atlantic coastal counties on Saturday night, but it will be largely dry with clear spells elsewhere. Minima of 1 to 4 degrees Celsius. Light southwest winds will freshen and veer westerly overnight, helping to mitigate the risk of frost and icy patches.

Sunday will be a cold, bright and breezy day with sunny spells and scattered showers. The showers will be most frequent in the west and north, with a continued risk of hail and isolated thunderstorms. Afternoon highs will range from 5 to 8 degrees, and it will feel chilly in the moderate to fresh northwest winds. Sunday night will be cold with a sharp frost and icy patches developing. Minima will drop to between minus 3 and plus 3 degrees.

Dry on Monday with variable cloud amounts and bright or sunny spells. Top temperatures 6 to 8 degrees in light variable breezes.

Current indications for Tuesday suggest a milder but mostly cloudy day with patchy rain developing in the western and northwestern areas and highs of 7 to 11 degrees.