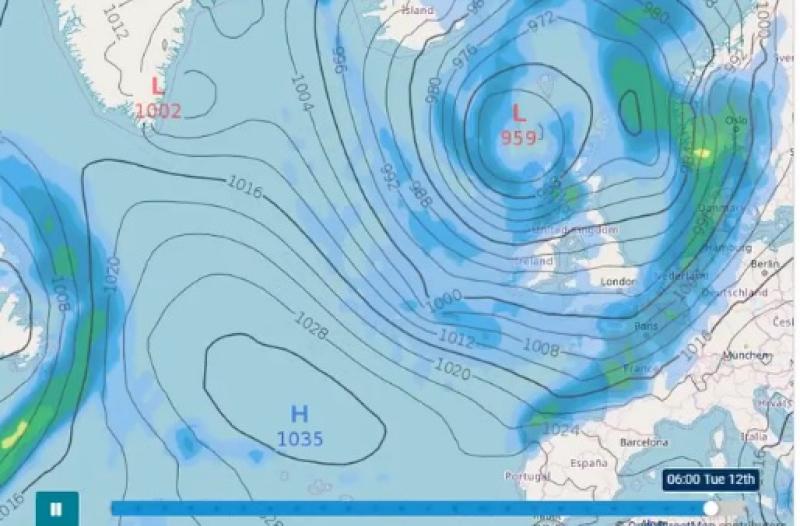 Weather forecasters say an active jet stream is driving wintry weather with the possibility of snow over Ireland with a significant looking episode possible early next week.

Met Éireann is forecasting the wet and unsettled weather to continue into next week following another weekend of very cold and windy weather which carries the risk of more snow. MORE BELOW TWEET.

Most places will be dry at first but rain will spread N to all parts of the country this evening & tonight, finally reaching Ulster around midnight. Heaviest rain will be across the E & S of the country but snow is expected over Ulster on higher ground. Lows 2 to 5C in E winds. pic.twitter.com/isYkCPTrzU

Its forecasting partner in the UK says the jet stream is responsible for the poor start to Spring. MORE BELOW TWEET

It's going to be a rather unsettled week in the UK. This is due to a strong jet stream high above the Atlantic steering weather fronts in our direction. If you want to find out more about the jet stream, you can here https://t.co/mK920ddSqg pic.twitter.com/9uaBBgxaQ6

TODAY - WEDNESDAY 6TH MARCH
Outbreaks of showery rain today, heavy at times in parts of Ulster but elsewhere lighter and patchier with good dry intervals and some bright spells. Highest afternoon temperatures generally between 5 and 10 degrees and coolest in the north. Winds mostly moderate to fresh and gusty northwesterly but strong at times along coasts

TONIGHT - WEDNESDAY 6TH MARCH
Tonight will be blustery with showery rain, heavy at times in parts of Ulster, North Leinster and parts of the southwest, the best of the clear spells in the southeast. Lowest temperatures of 1 to 5 degrees with fresh to strong and gusty west to northwest winds with gales on exposed coasts of the north and east.

TOMORROW - THURSDAY 7TH MARCH
Thursday will be a bright day with sunny spells and occasional showers, some of the showers heavy with the risk of hail and some wintry on high ground in the north. Highest temperatures of 7 to 10 degrees with moderate to fresh and gusty northwest winds but strong at times along coasts.

NATIONAL OUTLOOK
On Thursday night, winds will gradually ease and showers will mostly die out. It will become cold with clear spells and with a sharp frost and icy patches developing.

Friday will start off dry with some sunshine in the east. However, cloud and rain will develop in the west during he morning and will spread across the country, becoming heavy in places and falling as sleet on high ground in Ulster. Highest temperatures of 7 to 11 degrees. The rain will clear through the evening and early night with moderate to fresh southerly winds veering westerly and freshening, becoming strong on west and north coasts. Lowest temperatures of 1 to 5 degrees.

Saturday will be blustery or windy with a band of showery rain moving eastwards across the country, falling as sleet in places, especially on high ground in Ulster and Leinster. It will later with sunny spells and showers following. Highest temperatures of 5 to 10 degrees, but becoming very cold in the evening and night with showers turning wintry overnight and with frost developing in many areas.

Sunday will be a very cold and blustery day with sunny spells and wintry showers. Highest temperatures of 4 to 7 degrees with fresh, gusty westerly winds, which will be strong in coastal areas. Frost will develop on Sunday night.

Early next week will continue very unsettled with wet and windy weather at times and some wintry showers.