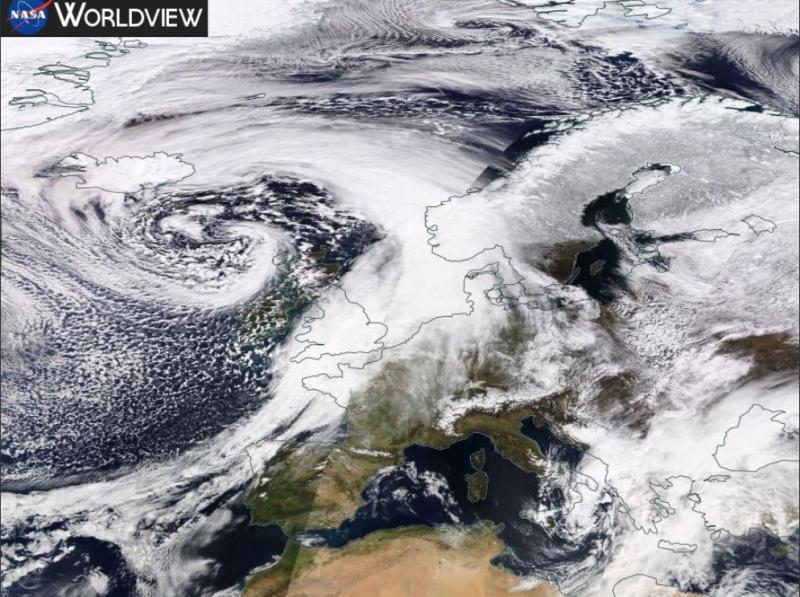 NASA satellite picture of Storm Gareth shows it is something to be concerned about.

A photograph from the space agency reveals the scale of the weather event due to hit Ireland on Tuesday and Wednesday.

The latest #satellite image from @NASA worldview shows #StormGareth, centred to the northwest of the UK pic.twitter.com/AGxFjQGDyQ

Storm Gareth weather is set to bring sustained bitterly cold gale force winds of up to 130 km/h  according to the latest from Met Éireann.

TODAY - TUESDAY 12TH MARCH
Becoming extremely windy, especially in Ulster and Connacht, with very strong westerly winds extending to all parts and reaching gale force in the north and northwest, with severe and damaging gusts. With high seas, there is also a risk of coastal flooding along Atlantic coasts. There will be some bright or sunny spells, but occasional heavy showers of rain and hail also, with some sleet, mainly over high ground and a risk of thunder. Highest afternoon temperatures 5 to 8 Celsius.

TONIGHT - TUESDAY 12TH MARCH
Tonight will be very windy, with very strong west to northwest winds, up to gale force in the north and northwest, with further severe and damaging gusts for a time, but winds will ease a little towards morning. There will be further showers also, a few of hail, with a continuing risk of thunder for a time, mainly in northern counties, but showers will become more scattered later. Minimum temperatures 3 to 6 Celsius.

TOMORROW - WEDNESDAY 13TH MARCH
Tomorrow, Wednesday, will be mainly dry and bright at first, with just a few scattered showers. More persistent rain will extend from the Atlantic during the afternoon and evening, affecting mainly Connacht, Ulster and north Leinster, but any rain further south will be patchy. Windy at first, with strong west to northwest winds, gradually easing for a time. Maximum temperatures 8 to 10 Celsius.

Wednesday night will be windy with strong and gusty west to southwest winds with gales along coasts. Spells of rain will occur with some heavy bursts particularly over the western half of the country. Lows of 6 to 10 Celsius.

Thursday will continue mostly cloudy with further spells of rain, the rain mainly affecting the south and west in the afternoon, but drier conditions in Leinster and Ulster in the afternoon and evening with just the isolated shower. Winds moderate to fresh west to northwest in direction but strong and gusty at times along southern coasts. Highest temperatures 8 to 13 Celsius. Outbreaks of rain and drizzle Thursday night with moderate to fresh southwest to west breezes. Lows of 5 to 11 Celsius, mildest in the south.

Friday: A band of rain will extend across the country Friday morning but clear into the Irish Sea by afternoon. Brighter and drier conditions will follow from the west later but possibly staying cloudier along southern areas. Highest temperatures of 9 to 12 Celsius in moderate to fresh westerly winds. Rain will reach southern coasts Friday night and extend to much of Munster and South Leinster overnight, with some heavy bursts possible. There is the risk of the rain turning to sleet for a time. Lows of 1 to 4 Celsius.

Saturday: Heavy and persistent rain will affect much of Leinster and Munster , there will be some heavy bursts with a risk of hail. Some of the rain possibly turning to sleet, with snow on hills and mountains. Elsewhere it wil be drier with just a few showers, although some of hail. Cold with highest temperatures of 3 to 5 Celsius. Saturday night will become dry in most areas, but a few showers will persist in Atlantic coastal counties and a few will be wintry. Cold with lowest temperatures of -1 to +3 Celsius with frost and icy stretches.

At the moment Sunday St Patricks day is expected to be a bright and cold day with sunny spells and scattered showers, some of the showers wintry in the north and northwest. Highest temperatures 7 to 9 Celsius with a fresh westerly breeze.