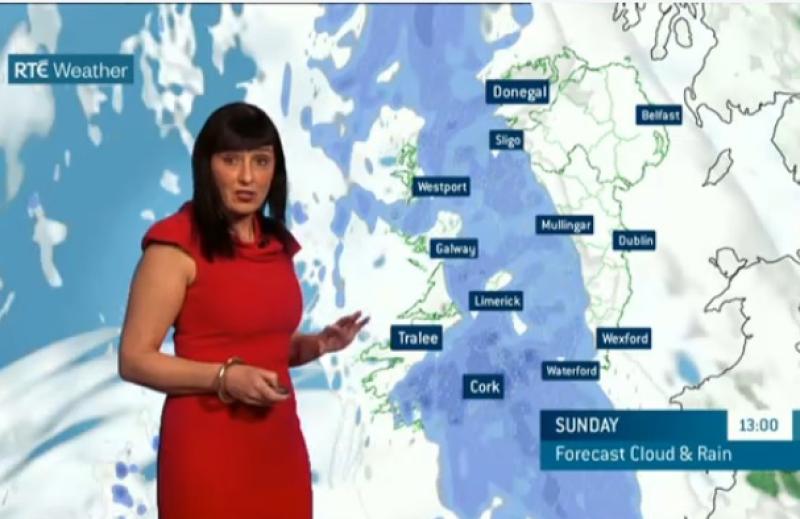 Met Éireann weather warnings are in place for extensive parts of Ireland for heavy rain for the next two days with Sunday expected to be a wet day in many places.

Status Orange and Yellow rain and wind warnings are active with some in place until Monday.

The forecaster says the Status Orange rain warning is in place for Cork and Waterford.

The forecaster is warning of flooding and hazardous driving conditions in many areas covered by the warning. Rainfall amounts will be highest along the south coast and in mountainous areas.

A similar but lower Status Yellow rainfall warning is also active for Kilkenny, Clare, Kerry, Limerick, Tipperary and all of Connacht.

It is also valid until 6pm on Monday.

In her bulletin on RTÉ after the evening news on Saturday, Met Éireann meterologist Jean Byrne said rain would be widespread across the country on Sunday. She forecasted that dryer mildler weather is on the way next wee. MORE detailed weather forecast BELOW TWEET.

This chart shows forecast pressure and precipitation every 6 hours for 7 days. pic.twitter.com/uIyA3CiGQ2

A Status Yellow wind warning is in place for Donegal, Galway, Mayo and Kerry is valid until 3 am Sunday, April 14.

Sunday will be wet in Munster, Connacht, west Ulster and in the west and south of Leinster with spells of heavy rain or sleet with spot flooding. Rain will become lighter and more patchy through the afternoon and evening. East Leinster and much of Ulster will remain dry or with just small amounts of rain. Cold and windy with highest temperatures of just 6 to 9 degrees and fresh to strong, gusty southeast winds.

NATIONAL OUTLOOK
General: Very unsettled and rather cold at first, with very heavy rain and strong winds, with flooding in places. But turning drier and milder from mid-week.

Sunday night: Very wet and windy overnight Sunday in many southern and western counties areas with heavy rain developing in strong and blustery southeasterly winds, with gales at the coasts. Some flooding is likely in southern parts of Munster also. It will probably hold mostly dry in some eastern and northern counties and not as windy as in the west and southwest.

Monday: Strong winds and heavy rain are likely again on Monday over much of Munster and Connacht, with some very heavy or thundery downpours possible especially in parts of the south and southwest, with an ongoing risk of flooding. Some rain at times elsewhere also, but it's likely to be more scattered and there will good dry periods especially in more eastern and northeastern parts. Afternoon temperatures of 8 to 10 degrees Celsius in very strong and blustery southeast winds with gales in coastal areas.
Further persistent rain overnight Monday, but winds gradually easing. Overnight lows of 4 to 8 degrees Celsius.

Tuesday: Rain for a time in eastern counties, clearing later. Drier and brighter further west with scattered showers. Less cold with moderate winds on Tuesday with afternoon highs of 9 or 10 degrees in eastern areas but 13 or 14 degrees in the west and winds will be moderate easterly. Rain at times Tuesday night in eastern areas, but becoming mostly dry elsewhere with possibly some mist or patchy fog developing in places. Overnight lows of 4 to 7 degrees Celsius.

Wednesday: Milder and dry and bright in many places on Wednesday just scattered light showers in some western or southwestern parts. Highs of 10 to 14 degrees Celsius and light winds.

Thursday and Friday: indications suggest mild, dry and settled weather with light winds and temperatures in the mid-teens.