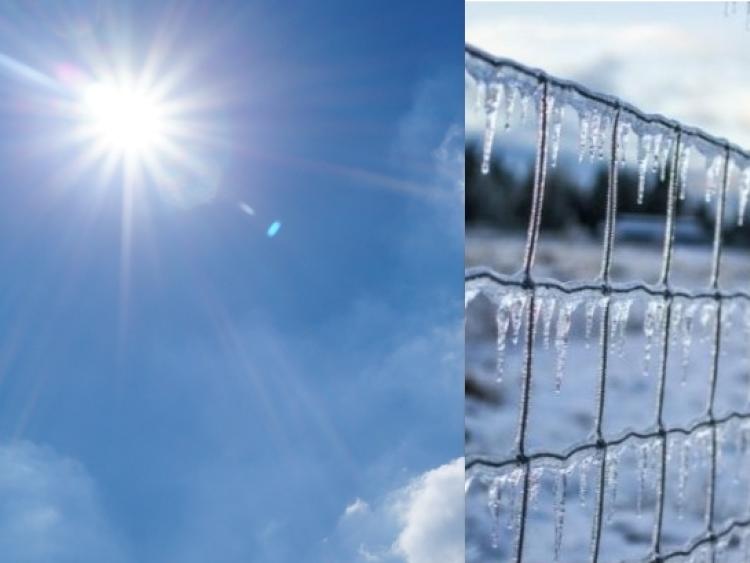 The weather forecast for Ireland for the May Bank Holiday Weekend is for mostly dry and settled conditions but freezing conditions at night.

The weather forecast for Saturday is for any showers in the east and north to clear to leave a dry and mostly sunny day, with just a little patchy cloud bubbling up in the afternoon. Rather cool despite the sunshine though, with maxima ranging 9 to 15 degrees north to south, with the highest values again in Munster. Moderate northeasterly winds, fresh along coasts at first, will gradually ease through the day.

Met Éireann says it will be cold, mostly dry and fairly clear on Saturday night. Lowest temperatures -1 to +2 degrees, with a widespread grass frost. A few showers may affect parts of the north coast. Light variable or northerly breezes will be moderate on exposed coasts.

The weather forecast for Sunday from Met Éireann is for a cold start to the day but with the early grass frost soon clearing, to give a dry, bright and sunny morning. More cloud about later, but further sunny spells also but a few light showers will affect parts of the north coast. Fresh and rather cool over Ulster, northern parts of Connacht and Leinster, with highs of just 9 or 10 degrees, in a moderate northwest to northerly breeze. Temperatures higher elsewhere, with top values of 12 to 14 degrees, in light variable breezes. Cold overnight, with lows of 0 to +3 degrees, in almost calm conditions, with grass frost in places. A few showers will affect parts of the north coast.

According to Met Eireann, there will be some showers at times over Ulster, but dry elsewhere. Rather cloudy overall, but a few bright or short sunny spells at times. Temperatures still below average with highs of 9 to 12 degrees cloudy overnight, with patches of mist and drizzle in places and lows of 3 to 6 degrees.