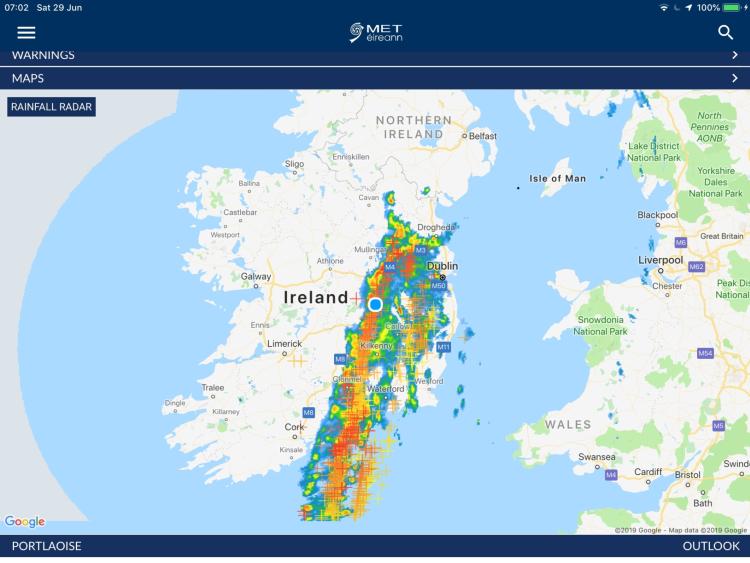 Met Éireann has issued Status Orange thunderstorm weather warnings which carry risks of lightning, heavy rain that could result in flooding and hazardous driving conditions for Dublin, all of Leinster and five other counties.

The Leinster, Cavan, Monaghan and Waterford alert from Met Éireann warns that thunderstorms will affect the eastern half of the country on Saturday morning with heavy downpours carrying the risk of hail and gusty winds.

It warns of temporary surface flooding is possible for a time, combined with the risk of hail will lead to hazardous driving conditions in some areas.

It is valid from 5 am until noon on Saturday, June 29.

A similar Status Orange thunder warning is valid for eastern parts of Tipperary from 6 am to 10 am Saturday.

A Status Orange alert, the second highest level of warning, is issued for thunderstorms when widespread thundery activity is expected over an area of several counties by Met Éireann. MORE ON WEATHER WARNINGS. Detailed forecast below tweets the first of which is from Laois weather which caught lightning on camera near Durrow.

Cumulonimbus clouds approaching Dublin in the past hour. Thunderstorm warnings are active for much of the eastern half of the country this morning. Take care when driving due to the risk of surface water and hail on roads.https://t.co/ozrQHtoOkt pic.twitter.com/cVCARqwEDz

In its forecast issue on its website at 05:21 on Saturday morning Met Éireann said thunderstorms would affect parts of the east and southeast this morning bringing sudden downpours, gusty winds and hail.

It said this would cause Hazardous driving conditions are likely in areas affected. Largely dry elsewhere with hazy sunny spells developing and just isolated showers. Showers in the east clearing this afternoon with good sunny spells breaking through but further showers will push in to affect parts of the southwest and west. Another warm day with highest temperatures of 19 to 24 degrees in moderate southerly breezes.

TONIGHT - SATURDAY 29TH JUNE
A breezy night with clear spells and a few showers, these mainly affecting the west and northwest. Minimum temperatures of 12 to 15 degrees in fresh southwest winds.

TOMORROW - SUNDAY 30TH JUNE
Bright and breezy on Sunday with sunny spells and scattered showers. Maximum temperatures of 17 to 20 degrees in moderate to fresh westerly winds.

Tuesday: Dry with a mix of cloud and sunshine. Maximum temperatures 15 to 19 degrees. Dry overnight with light winds allowing some mist or fog to form. Minimum temperatures 7 to 10 degrees.

Wednesday: Another dry day with sunny spells. Highs of 17 to 21 degrees. Dry with clear spells overnight. Minimum temperatures 7 to 10 degrees.