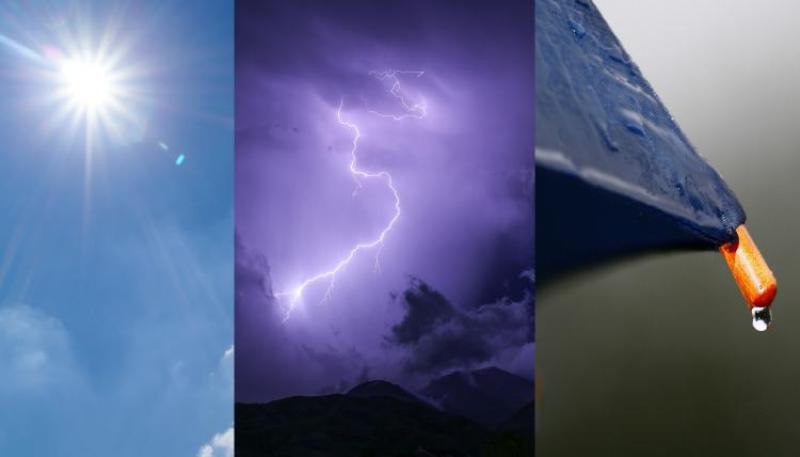 The Met Éireann Irish weather forecast for the August bank holiday weekend predicts a mix of sunny spells, showery rain and thunderstorms with temperatures up to 24 degrees.

Kicking off the August bank holiday weekend, Friday will be dry and warm with hazy sunshine in most areas. A few scattered showers may develop in the afternoon, mainly in Ulster. Maximum temperatures 19 to 25 degrees, in mostly light southeasterly breezes.

Friday night will be dry in many areas with variable cloud cover according to Met Éireann. Showery rain will extend across much of Munster later in the night. Winds mostly light southeasterly, freshening on the southwest coast. Minimum temperatures 10 to 14 degrees.

Dry&warm with hazy sunshine in most areas. A few scattered showers may develop in the afternoon, mainly in Ulst. Highs of 19 to 25°C.
Tonight will be dry in many areas with variable cloud cover. Showery rain will extend across much of Muns later in the night. Lows of 10 to 14°C. pic.twitter.com/bFvo3bT7K6

Saturday will start dry in most areas with some sunshine. However, showery rain in Munster will become widespread during the day. There will still be good dry and bright intervals for the afternoon and evening as well. Maximum temperatures 18 to 22 degrees in mostly light to moderate southeasterly breezes, fresh in western coastal areas.

While it might be warm, unsettled weather is set to continue up to and including Wednesday next, with a risk of heavy, thundery downpours at times. Temperatures around normal, or a little above.

On Saturday night, there will be further outbreaks of showery rain, becoming confined mainly to eastern coastal areas by morning, with mainly dry conditions elsewhere. A few mist or fog patches may develop. Minimum temperatures 12 to 14 Celsius, in mostly light southeasterly breezes.

On Sunday, Met Éireann says there will be a few bright or sunny spells, especially in the east and north, but scattered showers also. Showers will merge to give longer spells of rain in west Munster during the day and also in west Connacht later, with a risk of thunder.

There is a slight risk of thunder in the north also. Maximum afternoon temperatures 19 to 23 Celsius, in mostly moderate southeasterly winds, but winds will be fresh to strong and gusty along western and southwestern coasts. Most areas will become dry overnight, with clear spells and lows of 11 to 14 Celsius.

A nationwide forecast and outlook covering the next week can be found here. https://t.co/9gKN6SVok4 pic.twitter.com/7n0L0TcQTW

Monday will be dry in many areas at first, but showers in the west and southwest will become widespread during the day.

The showers will become heavy and prolonged in places, with a risk of thundery downpours, especially in the western half of the country (but possible anywhere), and this could lead to spot flooding.

Best of the bright spells in the east and southeast. Maximum temperatures 18 to 21 Celsius, with mostly moderate southwesterly winds, but winds strong and gusty along western and southern coasts.

The outlook for Tuesday and Wednesday shows some bright spells, but occasional showers also, many of them heavy, with a high risk of thundery downpours and spot flooding. Maximum temperatures 18 to 21 or 22 Celsius. Winds mostly light to moderate southwesterly on Tuesday but fresh along west and southwest coasts. On Wednesday moderate southwest winds will veer west to northwest.

Further outlook: Early indications suggest that Thursday will have fewer showers, but a few still possibly heavy over Ulster, some bright or sunny spells also. A mix of sunny spells and few scattered showers Friday, highs of 19 to 21 Celsius.