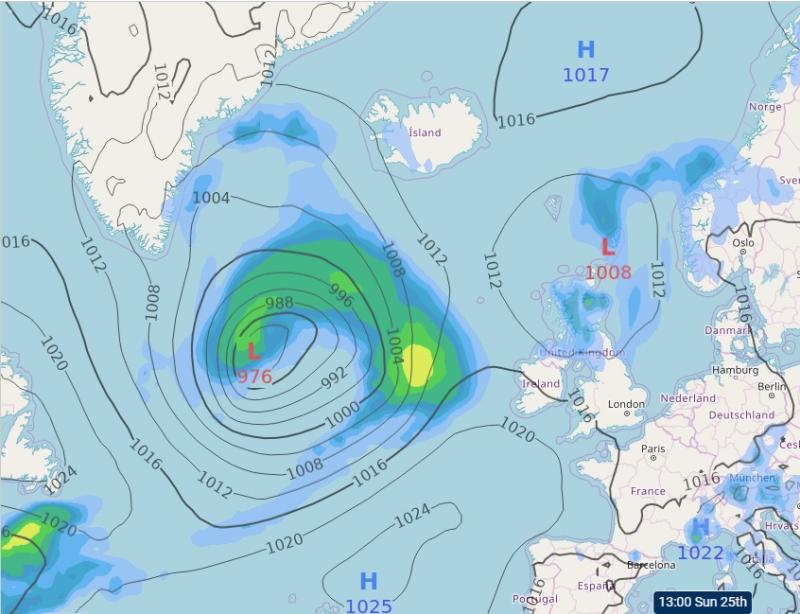 Met Éireann is forecasting more unsettled weather for the rest of the week and while it is expected to warm another stormy spell is on the cards for the end of the week.

The forecaster says changeable and unsettled weather is the featured trend for the rest of the week. It is expected to be relatively cool at first, with temperatures a little below normal. This will change as it will becoming quite warm and humid at times after midweek in the midlands, east and south.

The forecaster's tweeted seven-day chart shows a big low-pressure system coming close to the north-west of Ireland on Sunday. More below tweet.

Our Atlantic chart shows Precipitation and Pressure forecast in 6 hour intervals over the next 7 days. https://t.co/9Giuj4CR5m
A national forecast and outlook for the next few days can be found here.https://t.co/9gKN6SVok4 pic.twitter.com/AVPmrVM9Zs

Showers will die out on Monday night and it will become mostly dry with good clear spells. Lowest temperatures 7 to 11 degrees in light to moderate west to southwest breezes.

Tuesday will start dull or cloudy with outbreaks of rain and drizzle in the west and south at first extending northeastwards during the afternoon. Becoming drier with some bright spells in the south later in the evening. Top temperatures of 16 to 19 degrees in light to moderate southwesterly breezes.

Wednesday will see windy and wet weather. Met Éireann forecasts rain to extend from the Atlantic during the morning and afternoon, turning heavy in many areas and accompanied by fresh to strong southerly winds. Max. 16 to 19 Celsius. Clearer weather, with just isolated showers, will follow from the Atlantic later Wednesday and early Wednesday night.

Thursday will be dry in most parts of the country, with some bright spells, mainly in the east and south. It will be predominantly cloudy, however, with some rain and drizzle developing, mainly in parts of the west and northwest.

Temperatures could reach 22 Celsius and it will be warmest in the east and southeast. Breezy, with moderate to fresh southwesterly winds.

Remaining dry in many areas, with some bright spells, especially in the east and south, where temperatures will rise to the low 20s. Atlantic coastal counties will not be quite as warm, with values in the high teens and some rain and drizzle is possible, especially in Connacht and west Ulster. Winds mostly moderate, southwesterly.

The forecast is still uncertain for the weekend but Met Éireann says the current indications suggest that the weather will be quite mixed, with some rain, but dry spells also. Turning cooler and fresher again later.