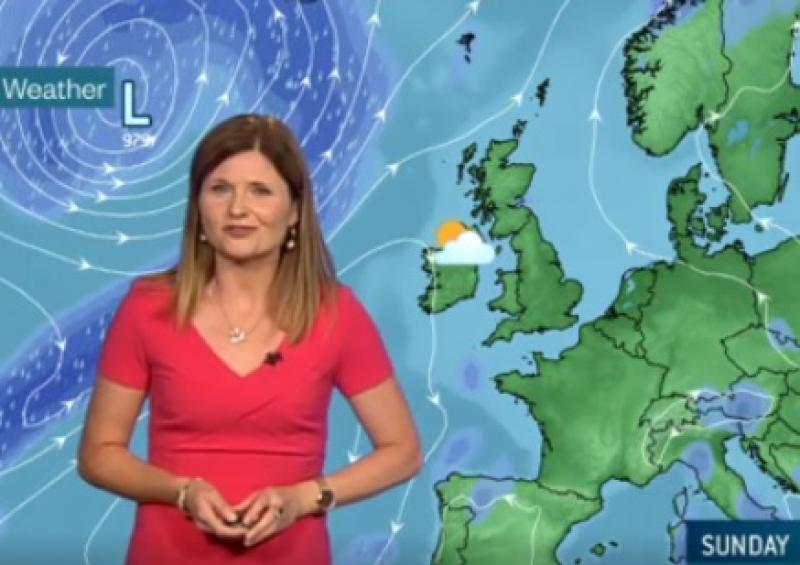 Michelle Dillon presents the forecast for Met Éireann on RTÉ.

There's some surprising good news at last on the weather horizon from Met Éireann.

Met Éireann meteorologist Michelle Dillon delivered the good news in her forecast after the RTÉ news.

"There's some summer warmth on the way later in the week and a lot of dry weather too," said the forecaster of what to expect this weekend.

She forecast that a mild southerly front would become established on Thursday with temperatures rising to 22 degrees in places.

She expected the high pressure to be 'in charge' by Friday with sunshine and warm weather with temperatures peaking in the mid-twenties.

She forecast that it would remain warm and dry with more sunshine on Saturday and Sunday. MORE BELOW TWEET

Our Atlantic chart shows precipitation and pressure forecast in 6 hour intervals for the next 7 days. https://t.co/9Giuj4CR5m
A national forecast and outlook for the next few days is available here.https://t.co/9gKN6SVok4 pic.twitter.com/jBpGTraxPj

THURSDAY 22ND AUGUST
Thursday will be a dry day in the east and south with sunny spells breaking through. Outbreaks of rain and drizzle will affect the west and north. Becoming warm with highest temperatures of 18 to 22 degrees. Breezy at times with moderate to fresh southwest winds

NATIONAL OUTLOOK
Thursday night will become mostly dry as high pressure builds from the south but several low pressure systems will continue to track northeastwards between Ireland and Iceland bringing cloudier conditions to the northwest with just a few spots of rain or drizzle in western and southwestern coastal districts. Staying mild overnight with lowest temperatures around 13 or 14 degrees in light to moderate southwest to southerly winds.

Friday will be a largely dry day under the influence of high pressure from the south. There will be some bright or sunny spells breaking through but in the west and north it will be somewhat duller with patchy drizzle near Atlantic coasts and a few spots of rain near Connacht coasts later as a frontal trough edges closer to Ireland. It will become warm with top temperatures reaching 19 to 23 degrees, warmest over the midlands and east. Southerly winds will be mostly moderate but fresh along south and west coasts keeping temperatures there slightly cooler. Friday night winds will fall light with mist and fog developing. It will be generally dry over much of the country but outbreaks of rain and drizzle along Atlantic coasts will spread further inland by morning. Lowest temperatures will be around 10 to 13 degrees.

Saturday will be a dull or cloudy day. It will be mostly dry in the east at first but outbreaks of showery rain in the western half of the country will spread further eastwards during the afternoon but becoming more fragmented and patchy later followed by just isolated shower by evening. It will become warmer as top temperatures rise to around 20 to 23 degrees. Winds will be just light south to southeasterly.

Sunday will be mostly dry with some sunny spells but later sunshine might become more hazy as a warm front is likely to approach from the Atlantic with some patchy rain or drizzle affecting Atlantic coastal counties. It will become very warm with top temperatures reaching 20 to 24 degrees in just light variable breezes.

Monday will overall be mostly dry with some patchy drizzle or light rain. It will continue very warm as temperatures reach into the mid 20's. Tuesday patchy rain is likely to affect Atlantic coastal counties and temperatures are likely to drop a degree or so and reach high teens to low twenties.