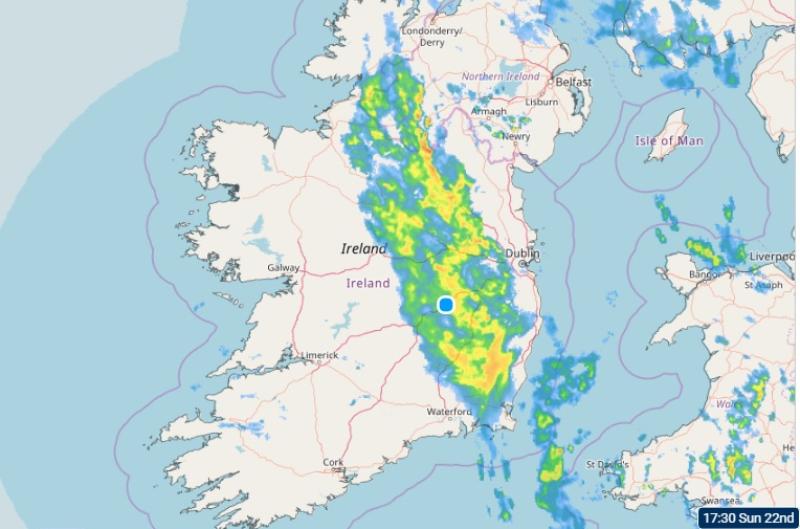 Driving conditions in Laois are hazardous after a weekend of heavy rain on Sunday which caused Met Éireann to issue a weather warning.

There was surface water and spot flooding in place on roads around Portlaoise after heavy rain on Sunday.

The warning said heavy rain would continue into the evening. Up to 30mm is expected in places and the forecaster warned of local spot flooding.

The warning is valid from 4pm to 9pm Sunday, September.

Sunday's rain follows extensive rain on Saturday with more heavy rain likely this week with rain totals expected to be above average. More below tweets.

Here is our 7 day Atlantic Chart, showing the pressure and precipitation forecast in 6 hours intervals.https://t.co/9Giuj4CR5mhttps://t.co/9gKN6SVok4 pic.twitter.com/f8ML6TX438

Met Éireann forecast issued on its website at 5.21pm on Sunday.

Heavy showery rain will clear the east of the country later this evening, and tonight will be mainly dry and clear with light winds and shallow fog patches for a time. Later in the night cloud will increase, southeasterly winds strengthen and rain will develop in west Munster by morning. Lowest temperatures of 5 to 10 degrees.

TOMORROW - MONDAY 23RD SEPTEMBER
Becoming wet and windy on Monday as rain extends to all parts of the country during the morning. Brighter and drier weather will follow in the afternoon with just a few showers. Maximum temperatures 16 to 20 degrees. Fresh to strong southeast winds will veer southerly and moderate with the clearance.

NATIONAL OUTLOOK
Summary: Unsettled weather for the rest of the week, with above average rainfall in most parts. Temperatures will be around normal, or a little above.

Monday night: Rain will continue to clear northeastwards and most areas will become dry. Lowest temperatures of 6 to 10 degrees, in mostly moderate southerly breezes.

Tuesday: Dry and bright in most areas at first. Rain in the southwest will gradually become more widespread during the day and may turn heavy in the south. Maximum temperatures 15 to 19 degrees. Windy for a time on south coasts with strong southwest winds, but otherwise winds will be mostly light.
Tuesday night: Becoming mainly dry with lowest temperatures of 10 to 14 degrees.

Wednesday: Dry in many areas, with some sunshine breaking through. Rain is likely to develop in the west later in the day. Maximum temperatures 16 to 19 degrees, in mostly light south to southwest winds, freshening as the rain arrives. It looks like there will be more rain on Wednesday night.

The further outlook is for ongoing unsettled weather.