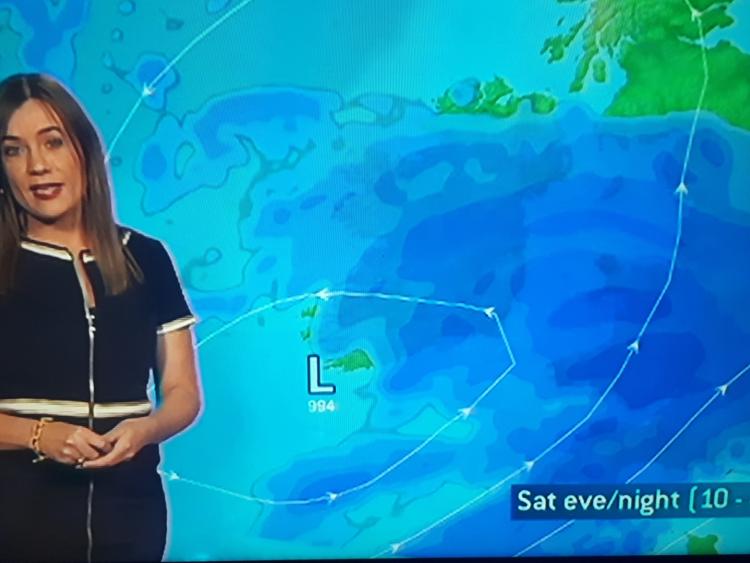 Met Éireann is forecasting a wet weekend of weather following lots of showers driven over Ireland by a 'vortex' in the Atlantic.

In her forecaster after the RTÉ news on Thursday, meteorologist Siobhan Ryan warned of very unsettled weather over the next few days.

"We've got a vortex steering in this very unstable westerly airflow," she said.

The forecaster said an 'organised band' of rain, that includes some 'nasty showers' would push in from the Atlantic on Thursday night leading to a wet start on Friday. It is expected to clear for a time but further rain will follow on with thunder included.

"Over the weekend it is looking extremely unsettled. Still a degree of uncertainty but it is likely to feed in some very heavy rain," she said.

She said rain is likely to affect all parts of the country on Saturday. She expects it to 'particularly heavy during'  Saturday night. Between 10 and 40 mms of rain is expected.

Sunday will be brighter, drier and milder but showery also. MORE BELOW TWEET.

Our Atlantic chart shows precipitation and pressure forecast in 6 hour intervals for the next 7 days.https://t.co/v5aQGT8F9e

The national forecast and the national outlook for the next few days are available here:https://t.co/yEsIuCkWlq pic.twitter.com/NpcccIB1UL

TONIGHT
Clear spells and heavy showers tonight. These will merge to longer spells of rain later in the night with a risk of thunder and spot flooding. Lowest temperatures 8 to 11 degrees with moderate to fresh, gusty southwest winds, strong along Munster coasts.

TOMORROW - FRIDAY 27TH SEPTEMBER
Friday will start off wet with heavy or prolonged showers. Brighter weather will spread from the west during the morning to give a mix of sunny spells and scattered showers for the afternoon and evening. Highest temperatures of 14 to 17 degrees with fresh and gusty westerly winds.

NATIONAL OUTLOOK
General: Fresh, breezy and unsettled, with showers or longer spells of rain, heavy and possibly thundery at times. Rainfall expected to be above normal in many areas.

Friday night: Breezy overnight away from northern areas, with fresh and gusty southwest winds but strong along coasts. Some clear spells, but occasional heavy showers or longer spells of rain. Lowest temperatures 8 to 12 degrees.

Saturday: Some bright or short sunny spells, but showers too with a few heavy in the north. A spell of heavy and persistent rain is likely to affect parts of Munster and Leinster in the late afternoon and evening with some spot flooding possible in these areas. Top temperatures 14 to 17 C. Moderate southwest winds will become variable through the afternoon.

Saturday night: Very wet in southern and eastern areas overnight with an ongoing risk of spot flooding. More showery elsewhere, with lows of 9 to 11 degrees with winds veering northwest by morning.

Sunday: A bright and fresh day with sunny spells and showers, some of the showers heavy in the north and northwest with the slight chance of a thundery burst here. Top temperatures of 15 to 17 degrees in a light to moderate northwest to west breeze.

Sunday night: Cold and mainly dry overnight, with some patches of mist and fog. Lows of 6 to 9 degrees, in slackening northwest or variable breeze.

Monday: Current indications suggest Monday will begin dry in most areas. Rain will spread from the southwest by early afternoon and extend over much of Munster by evening time. Highest temperatures of 14 to 16 Celsius in light to moderate southeast to east breezes, but winds fresh or strong at times along the southwest coast.

Monday night: Rain will extend to most areas overnight with a few heavy bursts in places. Winds will become light east to northeast or variable in direction. Lows of 9 to 11 Celsius with a few mist patches developing overnight.

Early next week: Current indications suggest our weather will remain changeable and unsettled, with showers or longer spells of rain at times.