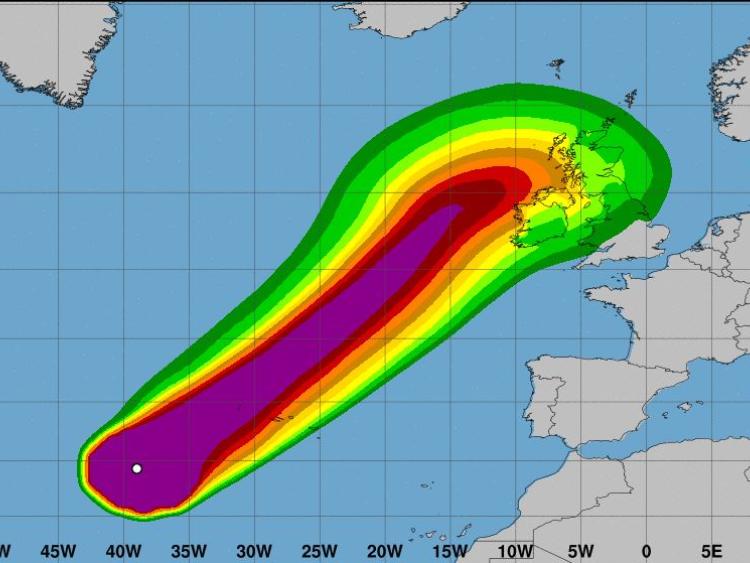 "The latest run of weather models indicates that Hurricane Lorenzo will track closer to the Ireland than previously anticipated, with the risk of severe winds increasing considerably in the past 24 hours, especially along Atlantic coastal counties of Northwest, West and Southwest," said Mr Nolan who runs the Midlands Weather Channel.

"Based upon the latest weather models wind gusts in excess of 140km/h seem possible in counties Kerry, Clare, Galway, Mayo, Sligo, Leitrim and Donegal. In some isolated locations wind speeds may increase to between 140-160km/h, mostly across exposed headlands.

MORE TO SEE: Watch Hurricane Lorenzo LIVE as it moves towards Ireland across the Atlantic Ocean

"More generally across the country much of southwest Munster, Connacht, the Midlands, and South Ulster will see winds ranging between 100-120km/h, which is still strong enough to cause some disruption to power and telephone services, as well a risk of travel disruption due to fallen trees. Disruption to flight services from Cork, Shannon, Knock and Donegal airports are likely for a time.

"Given the indicated strength of the winds I would expect red weather warnings to be issued in counties Kerry, Clare, Galway, Mayo, Sligo, Leitrim and Donegal. Orange weather warnings are likely farther inland, with just yellow weather warnings likely in the southeast of the country which should escape relatively lightly.

"Further updates will be provided on the MWC over the coming hours. Please stay up to data with all weather forecasts and warnings from the leading weather agencies."

You can check out the Midland Weather Channel by clicking here