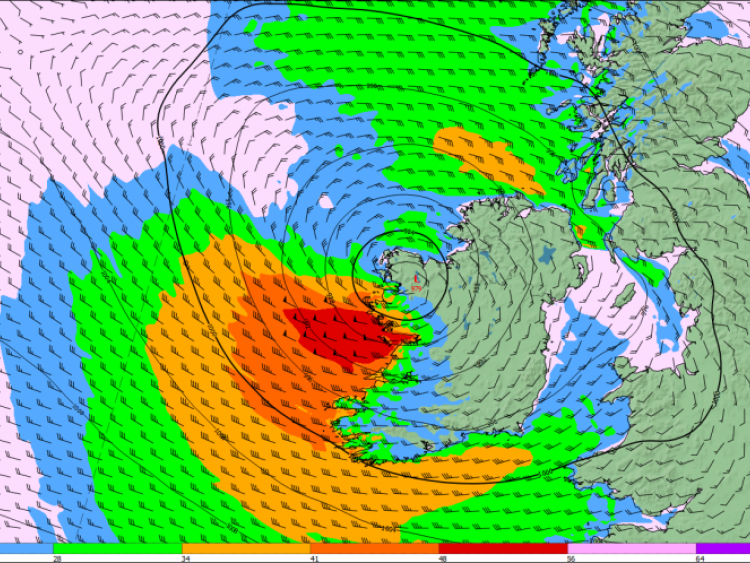 Met Éireann chart of Storm Lorenzo as it crosses Ireland

Met Éireann has set out the impacts of Storm Lorenzo when it hits Ireland.

In its latest commentary on the storm Met Éireann warns that trees are mostly in full leaf with a large surface area, so even moderate strength winds can bring down weakened trees and/or tree limbs.

In addition, it says some trees may be compromised due to saturated soils at the moment, and with more rain forecast with Storm Lorenzo some disruption due to falling trees/branches is likely.

Storm Lorenzo will also bring heavy rain, and with falling leaves blocking drains and gullies, some surface flooding is possible.

A dangerous storm surge will occur due to a combination of:

The forecaster says Lorenzo will accelerate north-eastwards across the mid-Atlantic during Wednesday, engaging with the polar jet-stream on Wednesday night approximately 1000 kilometres southwest of Ireland.

As Lorenzo passes over colder waters and engages with the polar Jetstream Met Éireann says it will lose its tropical characteristics and no longer be a hurricane, but it will be a dangerous Atlantic storm.

It says Storm Lorenzo will continue to accelerate north-eastwards, with its centre approaching the west of Ireland during Thursday. The forecaster warns that Lorenzo will then likely make a right turn, tracking across Ireland on Thursday night whilst it begins to gradually weaken.

Met Éireann says the exact track Lorenzo will take over Ireland is still subject to change. The most severe winds associated with Lorenzo are likely to impact Atlantic coastal parts on the southern flank of the storm, however strong winds are possible in all areas.

Hurricane Lorenzo was the easternmost and northernmost category 5 hurricane ever recorded in the Atlantic Ocean.