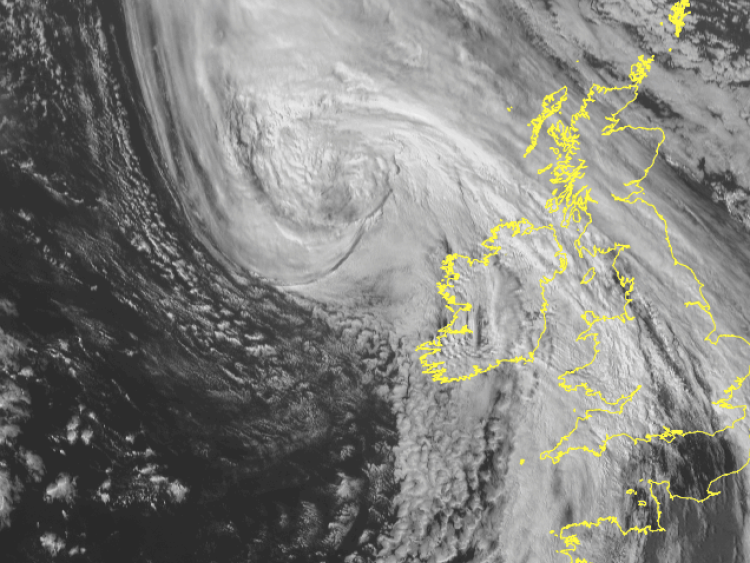 Met Éireann updated its Storm Lorenzo weather warnings at 4pm on Thursday as the storm is poised to make landfall in Ireland.

The forecaster has also tweeted out an image of the storm in the Atlantic off the Mayo coast ahead of its expected sharp turn to the east which will bring it right down across Ireland.

The Status Orange - Wind warning for Galway, Mayo, Clare, Kerry and Limerick update is as follows:

Southwesterly winds veering westerly will reach mean speeds 65 to 80km/h with gusts generally of 100 to 130km/h, higher in some coastal regions.
Storm surges will produce coastal flooding and damage.

The Status Yellow Wind warning for Ireland update is as follows:

Southeasterly winds will reach mean speeds 50 to 65km/h with gusts 90 to 100km/h resulting in some disruptive impacts.

Our latest visible satellite image of #stormlorenzo off the west coast of Ireland. Warnings for #lorenzo are available on https://t.co/oOxITrsnvw as well as our mobile apps on both IOS and android platforms. pic.twitter.com/9bX5EOVyJ7

The Status Yellow - Wind warning for Leitrim and Sligo is as follows:
West veering northwest winds of mean speeds of 50 to 65km/h with gusts of 90 to 100km/h.

The Status Orange - Gale Warning remains:
Southeast gales or strong gales today on all Irish Coastal Waters and on the Irish Sea. Winds veering southwest in the afternoon and reaching storm force 10 at times this evening and for a time tonight on Irish Coastal waters from Valentia to Loop Head to Erris Head.