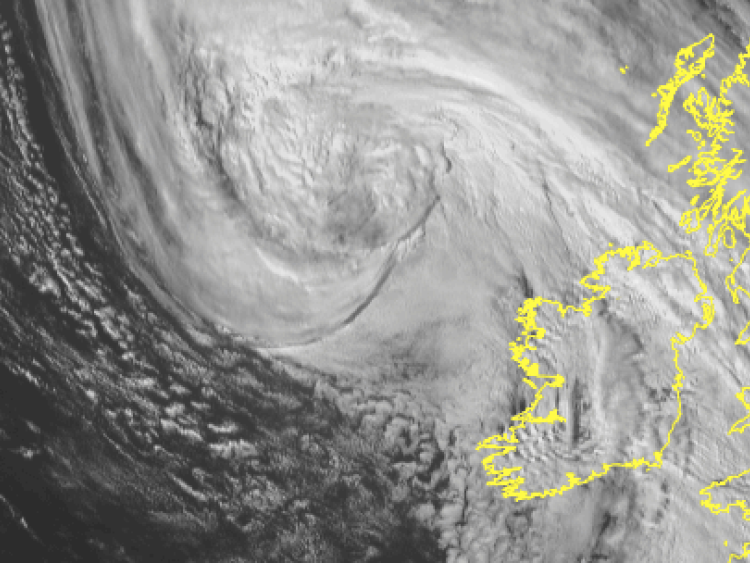 Storm Lorenzo will cross Ireland more slowly than earlier expected as it weakens according to Met Éireann's latest update.

In a commentary published at 5pm on Thursday, the forecaster said Lorenzo has moved north-north-eastward parallel to the west coast of Ireland this afternoon as forecasted.

However, there has been some change detected in the progression which has caused Met Éireann to alter its prediction and when it issues warnings.

"The depression is still expected to take a turn eastwards this evening or early tonight whilst weakening. The latest forecast guidance has, however, slowed the eastward progression down.

"This means that we could see a more prolonged period of heavy rain in north-western parts of the country tonight and early tomorrow. Also, the timing and duration of the wind warnings have been and will continue to be adjusted accordingly - as required," it said.

1/2 Windy with scattered outbreaks of rain this evening. Strong to gale force S to SW winds with some severe gusts in coastal areas. pic.twitter.com/g7bdrPY6Cg

The forecaster says Lorenzo was located around 180 nautical miles (340 km) west of Belmullet, Co Mayo at midday on Thursday.

It says its model guidance expected for some slight deepening of the Lorenzo low during the afternoon as the system tracked north-eastwards to the west of Ireland. Because of this, it expected south-easterly winds will be strong this afternoon, with a countrywide yellow wind warning in operation until 6pm today.

So-called upper air steering flows high up in the atmosphere are expected to cause the storm to turn in over Ireland. They say that by this time, the depression will be starting to fill meaning is that the storm force winds on the southern side of the low will begin to slowly subside.

It says the orange level wind warning for western coastal counties of Galway, Mayo, Clare, Kerry and Limerick will come into operation at 6pm and the yellow wind warning will become confined to Sligo, Leitrim, Cork, Waterford, Tipperary and Wexford.

Below is some recent track guidance for the centre of Lorenzo from our HARMONIE Irish Regional Ensemble Prediction suite from midnight 3rd Oct to midday on 4th October.