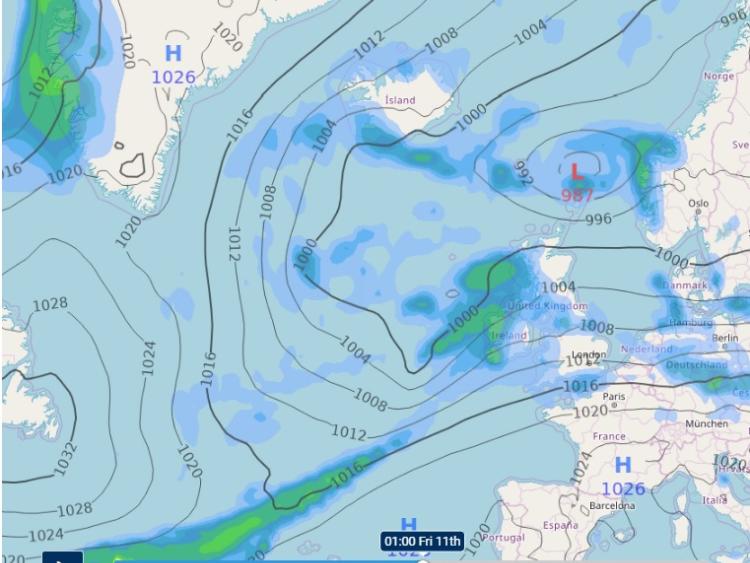 While the Irish rugby fans and team could be worrying about Typhoon Hagibis in Japan and the rest of us are recovering from Storm Lorenzo, there is nothing dramatic in Met Éireann's forecast for the week ahead.

The forecaster says Monday night will bring a mix of clear spells and showers, some heavy over the western half of the country. Lowest temperatures of 8 to 10 degrees with moderate to fresh, gusty southwest winds.

Tuesday will be a cool, blustery day with bright or sunny spells and widespread heavy showers, some prolonged and a few possibly thundery. Highest temperatures of 11 to 15 degrees, coolest in the northwest. West to southwest winds will be fresh and gusty.

Here is our 7 day Atlantic Chart, showing the pressure and precipitation forecast in 6 hours intervals.https://t.co/9Giuj4CR5mhttps://t.co/9gKN6SVok4 pic.twitter.com/Mc12yD8u5A

On Tuesday night, heavy showers will continue, especially over the western half of the country and in Ulster with fresh, gusty westerly winds. Lowest temperatures of 6 to 9 degrees.

Wednesday will bring a mix of sunny spells and heavy or prolonged showers with fresh, gusty west to southwest winds. Highest temperatures of 12 to 14 degrees.

There'll be further heavy showers on Thursday. They'll mostly die out during the evening and early night. Highest temperatures of 12 to 15 degrees with moderate to fresh westerly winds.

On Friday, persistent rain will spread eastwards to all areas and will be heavy at times. It will be accompanied by fresh to strong southerly winds, which will veer southwesterly as the rain clears on Friday evening and night. Highest temperatures of 14 or 15 degrees.

Saturday will be a bright day with sunshine and scattered showers. highest temperatures of 12 to 15 degrees with fresh west to southwest winds.

Sunday and the early days of next week will bring a band of heavy showers or longer spells of rain.