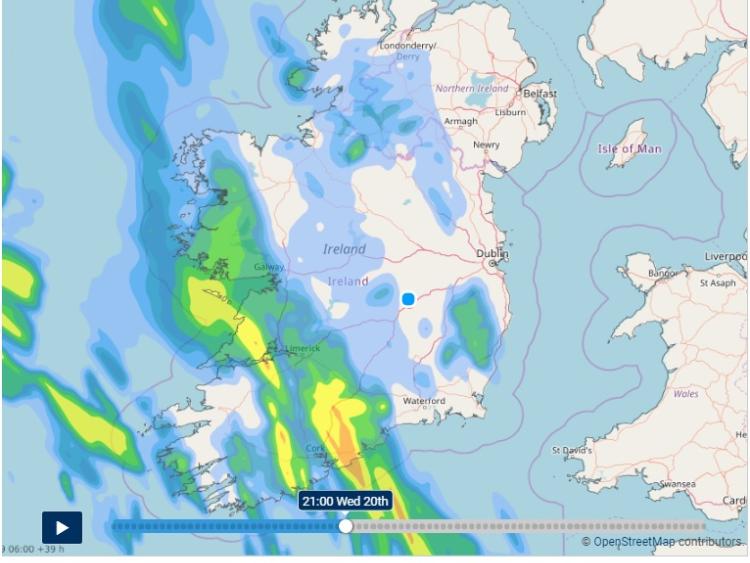 Met Éireann has issued a rain warning for parts of Leinster and Munster with spot flooding expected.

The forecaster's Status Yellow rainfall weather alert covers Kilkenny, Wexford, Cork, Tipperary and Waterford but rain is expected over much of the country.

The notice, which was issued at 11 am on Tuesday, November 19 warns that from the early hours of Wednesday to noon on Thursday, spells of heavy rain at times will give amounts of 30 to 50 mm with a risk of spot flooding.

In its weather forecast, Met Éireann says there will be heavy showers or longer spells of rain over much of the country on Wednesday. Highest rainfall amounts will be in Munster with a risk of spot flooding in places. It says winds will become strong and gusty in parts Leinster. Some heavy rain is expected overnight into Thursday which will be a mostly cloudy day with some dry spells. However, scattered outbreaks of rain, some heavy and prolonged across the south and east, will be a feature. Winds will be fresh and blustery but it will be mild. MORE BELOW TWEET.

Here is our 7 day Atlantic Chart, showing the pressure and precipitation forecast in 6 hours intervals.https://t.co/9Giuj4CR5mhttps://t.co/9gKN6SVok4 pic.twitter.com/iWFSeYFoMm

Met Éireann national forecast issued on its website at 9.07am on November 19.

TODAY - TUESDAY 19TH NOVEMBER
Rain spreading over Leinster and Ulster this morning, gradually clearing to the northeast this afternoon. Bright sunny weather over Munster and Connacht will extend to all areas as rain clears and fresh, gusty southerly winds, will become southwesterly and ease. Highest temperatures of 9 to 11 degrees.

TONIGHT
Tonight will start dry with clear spells and with frost developing for a time in Leinster and Ulster as temperatures fall to between 0 and 3 degrees. However, heavy showers will develop in the west and southwest and rain developing the southeast will move northwards over east Leinster and east Ulster overnight.

TOMORROW - WEDNESDAY 20TH NOVEMBER
Wednesday will be mostly cloudy with heavy showers or longer spells of rain over much of the country. Highest rainfall amounts will be in Munster with a risk of spot flooding in places. Highest temperatures 9 to 11 degrees with moderate to fresh southerly winds, becoming strong and gusty in coastal areas of Leinster.

Wednesday night will be mild and windy with showery outbreaks of rain - some heavy.

Thursday: A mostly cloudy day with some dry spells. Scattered outbreaks of rain also, some heavy and prolonged across the south and east. Southeast winds will be fresh and blustery but mild.

Friday: Staying relatively mild. Most areas will have good dry spells, but showers or showery rain will occur widely, especially over southern counties. Winds mainly from the east will be moderate. Temperatures typically 9 to 12 degrees.

Saturday looks like being dry in most places other than well-scattered showers, and winds will be light. However, rain and strong winds is set to spread countrywide during Saturday night and on Sunday.