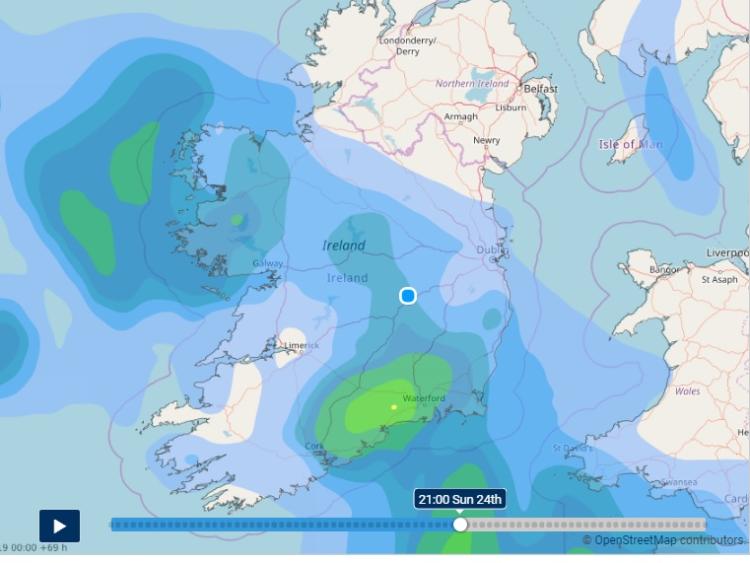 Met Éireann has issued a weather warning with a flooding risk as rain is set to be a big feature of the weekend's weather.

It says further spells of heavy rain is expected with a continued risk of thundery downpours and flooding. The warning is valid from 3pm on Friday, November 22 to 3pm on Saturday, November 23.

The forecast for the weekend will see low-pressure dominating says Met Éireann. More details below tweet.

A nationwide forecast and outlook covering the next week can be found here. https://t.co/9gKN6SVok4 pic.twitter.com/Lx7PKcH5Pe

Friday will stay mostly cloudy with showery outbreaks of rain. The rain will be heavy in places - especially across the south and southeast. Highest temperatures of 7 to 9 degrees in moderate to fresh east winds.

Persistent and occasionally heavy rain will move in across the eastern half of the country overnight, with the risk of spot flooding. Staying mostly dry across the west and southwest, but with patches of frost and fog. Rather cold, with lowest temperatures 1 to 5 degrees, in light northerly breezes.

Saturday will be a rather dull day with scattered falls of rain, persistent at times across eastern counties. Drier and somewhat brighter across the west and southwest, however mist and fog patches may be slow to clear these parts. Highest temperatures of 7 to 10 degrees, in light northerly breezes.

Outbreaks of rain over the midlands, north and east will gradually clear northeastwards on Saturday night, with the dry clear intervals in the west and south extending countrywide by dawn. Lows of 0 to 5 degrees with a risk of frost, coldest under the long clear spells in the south. Winds becoming light southwest to south or variable overnight, allowing mist and fog patches to form.

Mainly dry and bright in the north and east to begin on Sunday, with any early mist, fog and residual drizzle patches clearing, but thickening cloud in the west and south heralding the arrival of outbreaks of rain in Munster during the morning. The cloud and rain will gradually spread northeastwards over the country during the afternoon, with the heaviest of the rain likely to affect southern and later eastern coastal counties. Top temperatures of 7 to 11 degrees in light to moderate south to southeast winds, freshening on southern and southwestern coasts. Further spells of rain on Sunday night. Lows of 4 to 8 degrees. Moderate to fresh east to southeast winds, strong and gusty on western, northern and eastern coasts for a time, becoming light southeast or variable by dawn.

Lingering overnight rain only slowly clearing northeastwards during Monday, with brighter, sunnier spells and showers following in from the southwest. Winds mainly light southwest and variable, occasionally moderate in the south. Top temperatures of 9 to 12 degrees. Showers becoming isolated on Monday night with clear spells developing. Lows of 3 to 7 degrees in light southwest or variable winds with mist and fog patches.

There is still some uncertainty regarding Tuesday, but current indications suggest a spell of rain, heavy in places, will move eastwards over the southern half of the country, with drier conditions persisting further north. Top temperatures 7 to 10 degrees. Light variable breeze, becoming moderate to fresh northerly. Rain in the east on Tuesday night. Clear spells and showers further west. Lows of 4 to 7 degrees in light to moderate northerly winds, fresh at the coasts.