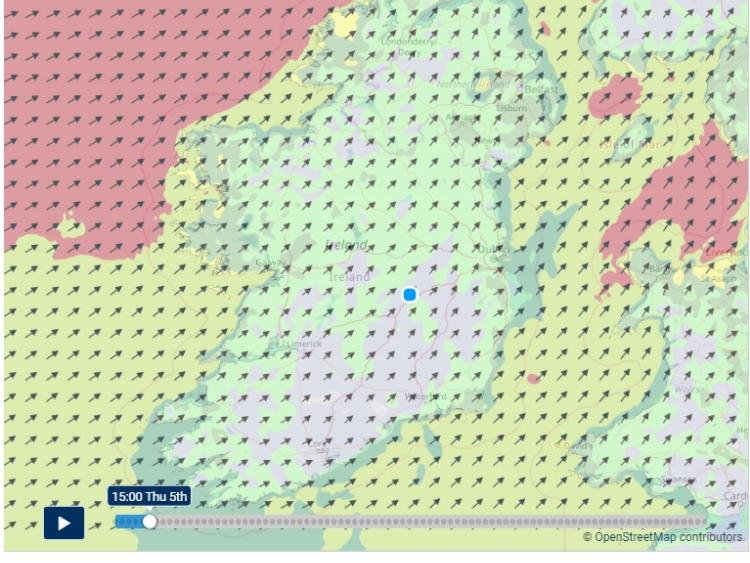 A Met Éireann weather warning for strong winds to hit Ireland during Thursday could be a taste what's to come with some cold stormy weather expected in parts of the country.

The forecaster's warning is in place for western counties while Met Éireann's forecast issued on Thursday morning predicts a "very windy today, with outbreaks of rain, mainly in Connacht, west Ulster and west Munster".

Heavy bursts of rain are expected in the west and northwest. The forecaster says there will be "good dry spells" in east Munster and Leinster, with just patchy rain and drizzle though this will become becoming more widespread this evening. Misty in places, with hill and coastal fog. However, it will be mild, with highest temperatures of 10 to 13 degrees, in fresh to strong and gusty south to southwest winds.

The Status Yellow wind warning is in place for Donegal, Galway and Mayo. Met Éireann sais south to southwest winds will reach mean speeds today of 50-65km/h with gusts of 90-100km/h.

The warning is valid from 8am to 8pm on Thursday, December 5, but Met Éireann expects more stormy weather to follow with temperatures dropping also. MORE FORECAST BELOW TWEETS

Update to Weather Alert for Wind.
Level: Yellow
For Donegal, Galway and Mayo.
Valid: 8am to 8pm Thursday.https://t.co/ozrQHtGpc1 pic.twitter.com/s0Q1NKdOgs

Met Éireann's forecast summary for the weekend and into next week is for the unsettled and changeable weather to continue. While it will be relatively mild at first, the weather is expected to turning cold at times next week according to Met Éireann who also expect it to be very windy at times. There is a risk of very strong winds on Sunday, possibly stormy in Atlantic coastal counties.

Here is our 7 day Atlantic Chart, showing the pressure and precipitation forecast in 6 hours intervals.https://t.co/9Giuj4CR5mhttps://t.co/9gKN6SVok4 pic.twitter.com/eUwt4QbdbE

Forecast issued by Met Éireann on its website on Thursday, December 5 at 8.55am.

Friday is expected to be a bright day, with sunny spells and scattered showers. These showers becoming more isolated throughout the afternoon. Highest temperatures of 9 to 12 degrees, in moderate to fresh west to northwest winds.

Friday night will be dry in most areas, with clear spells, but a few scattered showers will occur, mainly in western and northwestern coastal areas. Minimum temperatures 4 to 8 Celsius, in moderate westerly breezes. More persistent rain and drizzle will develop later west and northwest coasts.

Saturday will become mild with outbreaks of rain extending from the Atlantic, affecting mainly parts of Connacht and Ulster, but staying mostly dry in Munster and Leinster, with just a little patchy light rain or drizzle, chiefly on coasts and hills. Maximum temperatures 9 to 12 Celsius, in mostly moderate Southerly breezes, fresh on Atlantic coasts. Later on Saturday, a spell of heavy rain will develop in Atlantic coastal areas, extending eastwards during the evening and early night, with strengthening southerly winds. Rain will clear to scattered showers on Saturday night and winds will veer southwest to west, but they'll strengthen even further on Atlantic coasts, increasing strong to gale force there. Minimum temperatures 4 to 7 Celsius.

Sunday is set to be very windy, possibly stormy in Atlantic coastal areas, with strong to gale force southwesterly winds and with the risk of severe and damaging gusts, especially in the southwest, west and northwest. There will be some bright or sunny spells, but squally showers also. Cold, with maximum temperatures of 7 to 10 Celsius. Minimum overnight temperatures 3 to 7 Celsius, with winds very slowly easing later.

Monday is predicted to be dry in many areas, with sunny spells and just a few scattered showers, mainly in the north and northeast. Max, 8 to 11 Celsius, with moderate to fresh west to northwest winds continuing to ease. No significant frost overnight. Min. 1 to 4 Celsius.

The further outlook looks like the weather will remain changeable and unsettled for the rest of the week, with below normal temperatures on Wednesday and Thursday.

Here is our 7 day Atlantic Chart, showing the pressure and precipitation forecast in 6 hours intervals.https://t.co/9Giuj4CR5mhttps://t.co/9gKN6SVok4 pic.twitter.com/eUwt4QbdbE