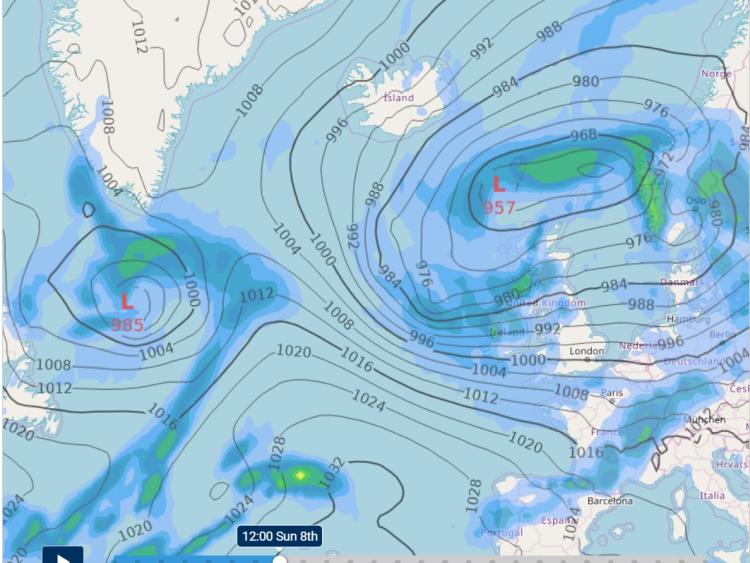 Met Éireann has updated its Storm Atiyah weather warnings as the storm is now expect to make its impact felt from Saturday night.

The forecaster continues to say that Storm Atiyah will track between Iceland and Ireland on Sunday generating a swathe of very strong winds across the whole country.

The updated Status Orange wind warning covers Donegal, Galway, Leitrim, Mayo, Sligo, Clare, Kerry and Limerick. It says Southwesterly winds later veering northwesterly will reach mean speeds of 65 to 80 km/h with gusts from 110 to 130km/h at times during the period.

Due to a combination of high seas and storm surge Met Éireann warns that there is a possibility of coastal flooding.

It is now valid from noon on Sunday, December 8 to 6am on Monday, December 9. The earlier warning said the Orange impact would be felt form 9am on Sunday.

A Status Yellow wind warning has been issued for Donegal, Galway, Leitrim, Mayo, Sligo, Clare, Kerry and Limerick. West to southwest winds are expected to reach mean speeds of 50 to 65km/h with gusts of 90 to 110km/h at times during the period.

This is valid from 7 pm on Saturday, December 7 to noon on Sunday, December 8 when the Orange alert comes into force for these western counties.

The rest of the country will not escape this powerful Atlantic weather system.

It says southwest winds later veering northwesterly will reach mean speeds of 50 to 60 km/h with gusts of up to 100 km/h at times during the period.