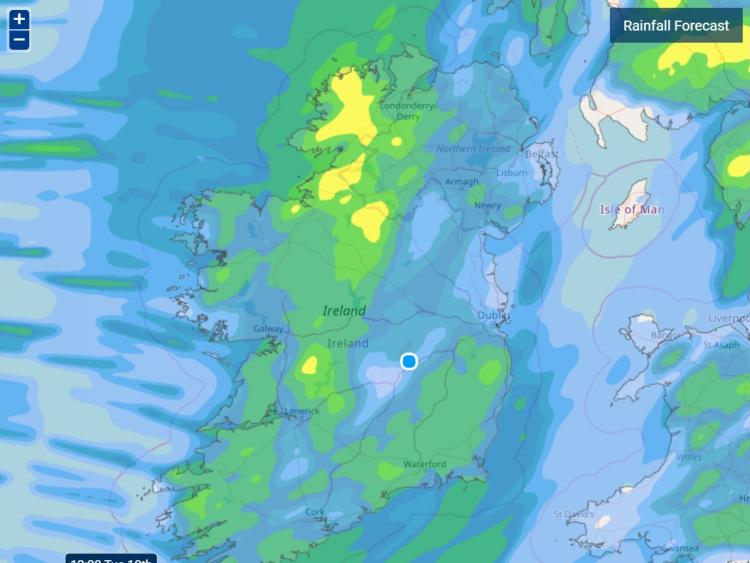 Met Éireann has upgraded its weather alert for Tuesday issuing a Status Yellow wind warning for the entire country.

The forecaster warns of strong and gusty southwest winds to veer westerly early this afternoon with some severe and damaging gusts; heavy squally spells of rain continuing too.

Motorists are advised to take care especially on rural roads as trees and structures that may have been weakened by Storm Atiyah at the weekend could suffer further damage and fall.

Rain and showers will be heavy at times as well, especially in Atlantic coastal counties.

The warning is valid until 4pm on Tuesday.

The weather outlook is for very unsettled for the remainder of the week. MORE DETAILS BELOW TWEETS

Very windy today with squally falls of rain, and the risk of hail and thunder. Strong and gusty southwest winds will veer westerly, with some damaging gusts possible. Mild for a time, with highs of 11 to 13 degrees, but turning colder later. pic.twitter.com/u4ALUjOLbW

Our Atlantic chart shows precipitation and pressure forecast in 6 hour intervals for the next 7 days:https://t.co/v5aQGT8F9e

The national forecast and the national outlook for the next few days are available here:https://t.co/yEsIuCkWlq pic.twitter.com/3M5x11OCbe

NATIONAL FORECAST issued at 10.07am onDecember 10 on the Met Éireann website.

Very windy this morning with some heavy outbreaks of rain. Still very windy into this afternoon with a mix of sunshine and scattered squally showers, some of hail and thunder. Strong and gusty southwest winds will veer westerly, with some severe and damaging gusts. Mild for a time, with highest temperatures of 11 to 13 degrees, but turning colder later.

Winds will ease somewhat this evening. Cold and blustery in turn tonight with a mix of clear spells and showers; frequent across the western half of the country with the ongoing risk of hail and thunder. Minimum temperatures of 0 to 3 degrees, in fresh and gusty southwest winds. A slight frost for sheltered spots.

Feeling raw on Wednesday with blustery heavy showers, as well as bright spells of winter sunshine. The showers will be most frequent in Atlantic counties, some of hail and thunder, with the odd wintry fall possible on higher ground. Highest temperatures of only 3 to 7 degrees, in rather brisk westerly winds.

Wednesday night: A cold start to the night with some early frost. Cloud is going to thicken later and outbreaks of rain will extend to much of the country overnight, possibly turning to sleet over northern hills. Minimum temperatures of 1 to 4 degrees.

Thursday: Mostly cloudy on Thursday with showery outbreaks of rain and strengthening winds with the risk of a period of very windy weather. A large spread in afternoon temperatures on Thursday, ranging 4 to 6 degrees in northern counties but a milder 7 to 10 degrees further south. Further showery outbreaks of rain overnight. Cold and blustery with minimum temperatures of 2 to 5 degrees in strong westerly winds.

Friday: Another cold and blustery day on Friday with some bright spells but also showers. Some of the showers merging to longer spells of rain at times and possibly giving some wintry falls on mountains. Highest temperatures of 4 to 7 degrees in fresh and gusty westerly winds. A mix of clear spells and rain or hail showers on Friday night. Minimum temperatures of 0 to 3 degrees.

Weekend: Early indications suggest the weekend will be cold and showery. There will be fresh and gusty winds with the risk of gales at the coast.