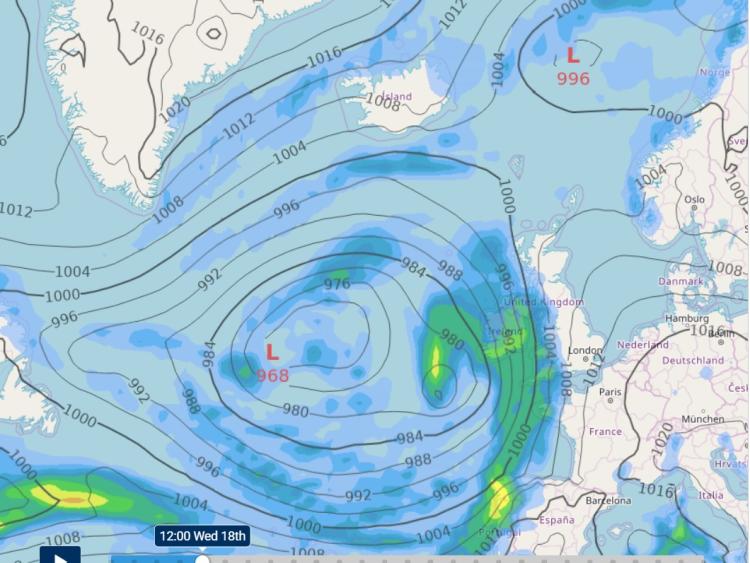 Met Éireann has issued a Status Yellow weather warnings for wind and rain as another spell of stormy weather is set to sweep Ireland.

The alert says that heavy rain will push northeastwards on Wednesday with rainfall accumulations of 30-40mm expected with the risk of localised flooding.

The warning is valid from 4am to 7pm on Wednesday, December 18.

A Status Yellow wind warning is in place for all of Ireland. The forecaster's alert says southeast winds, later veering southerly will gust 90-110km/h on Wednesday, strongest in coastal areas.

The warning is valid from noon to midnight on Wednesday, December 18.

Met Éireann has not declared a storm weather situation but Portuguese forecasters have issued warnings about a weather system called Storm Elsa.

The UK Met Office has also issued a Status Yellow Wind Warning from 4pm on Wednesday until 3am on Thursday that covers Northern Ireland. The warning states that strong winds are likely to bring some disruption to western areas of the UK

A nationwide forecast and outlook covering the next week can be found here. https://t.co/9gKN6SVok4 pic.twitter.com/b4ntsqvn9s

The national forecast issued at 4.30PM am on December 17 is as follows.

TODAY - TUESDAY 17TH DECEMBER
Most areas will be dry this evening with just isolated showers, but some mist and fog in places. Turning rather cold under clear spells, with frost setting in quickly after dark, with mostly light variable breezes.

TONIGHT
Cold and mostly dry early tonight with patchy frost, ice and fog, clearing from southern counties overnight. Southeasterly winds will strengthen and rain will move in to affect Munster before dawn. Minimum temperatures of -2 to +2 degrees, but turning less cold in the south later in the night.

TOMORROW - WEDNESDAY 18TH DECEMBER
Wet and windy on Wednesday with any frost clearing. Rain in the south will extend nationwide during the morning. The rain will turn heavy and persistent across southern and eastern counties with the risk of localised flooding. Strong and gusty southeast winds, with gales developing at the coast. Highest afternoon temperatures of 6 to 10 degrees.

Wednesday night will start wet in most places but the rain will quickly clear northwards, with just the odd coastal shower overnight. Southerly winds will drop off light to moderate with a few patches of mist and fog forming. Overnight lows of 5 to 7 degrees.

A lot of dry weather on Thursday with the best of the sunshine in west and north of the country. Cloudier in southern and eastern areas with some light patchy rain through the afternoon. Highest temperatures of 8 to 10 degrees, in light southeasterly breezes.

Current indications are for a dry night on Thursday. Winds will be light with patches of mist and fog. Turning cold with temperatures dropping back to between 1 and 5 degrees, with some ground frost.

At the moment Friday looks set to be dry for a lot of the country with showers affecting coastal areas. Bright spells look set to be limited with a lot of low cloud around and some mist and fog lingering into the afternoon. Cold with afternoon highs of 6 or 7 degrees.

Mainly dry and cold overnight on Friday with temperatures ranging from between 1 to 4 degrees with some frost in places.

The outlook for next weekend is for continued unsettled conditions and cold with daytime highs of 4 to 7 degrees.