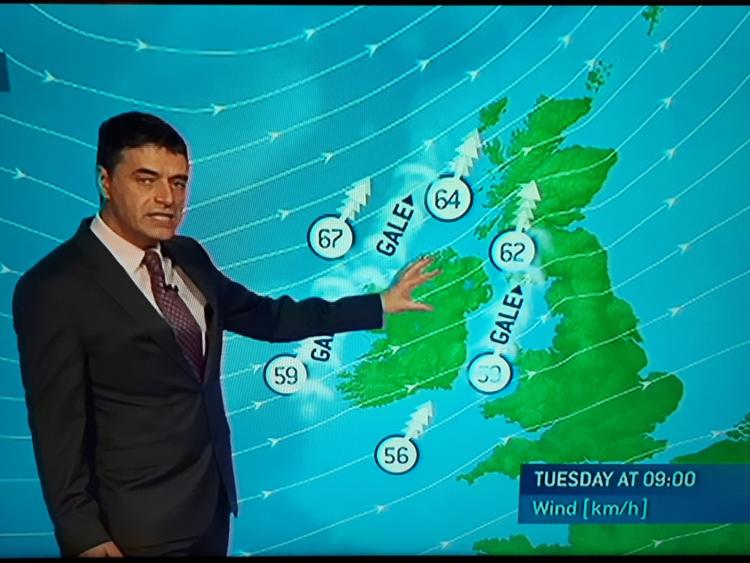 Met Éireann has issued weather forecast warnings with commuters set to feel the brunt of at times gale force conditions during the early morning commute on Tuesday.

The forecaster has two wind warnings in place for Tuesday,  January 7. Met Éireann's meteorologist Gerry Murphy gave details of what to expect in the forecast after the RTÉ news.

"The weather is going to be mild and windy as we go through tomorrow Tuesday," he said.

The worst of wind expected in Connacht and parts of Ulster and Leinster but Mr Murphy said it would be windy in all parts as well as being a cloudy, wet but also very mild day with temperatures as high as 13 degrees.

Winds are likely to reach gale force in parts. The forecaster said the winds would eventually slacken on Tuesday night.

The forecaster said it is worth noting that warnings coincide with the 181st anniversary of the so-called Night of the Big wind on January 6 1839 which caused significant loss of life in Ireland. MORE BELOW TWEET.

For full info for your area please see https://t.co/ozrQHtoOkt or our app on Android and IOS platforms. pic.twitter.com/vBlbfHep36

Two weather warnings are in place. A Status Yellow wind warning for Donegal, Galway and Mayo says southerly winds will gradually veer westerly during Tuesday reaching mean speeds of 50 to 65km/h with gusts of 90 to 110km/h, strongest near coasts and about high ground.

It is valid from 1am to 8pm on Tuesday.

Here is our 7 day Atlantic Chart, showing the pressure and precipitation forecast in 6 hours intervals.https://t.co/9Giuj4CR5mhttps://t.co/9gKN6SVok4 pic.twitter.com/boFcds0h4c

TONIGHT
Cloud will quickly thicken from the west and outbreaks of rain and drizzle will spread across the country accompanied by freshening southerly winds. The winds will become strong across west and northwest counties. Temperatures will rise overnight with values ranging 7 to 10 degrees by dawn on Tuesday.

TOMORROW - TUESDAY 7TH JANUARY
Windy on Tuesday with strong southwest winds, reaching gale force along west and northwest coasts. Overall dull with scattered outbreaks of rain and drizzle. Mild for the time of year, with afternoon temperatures ranging 11 to 14 degrees.

Tuesday night: Patchy rain will clear eastwards on Tuesday night and the strong southwest breeze will begin to ease. Skies will clear later on and minimum temperatures will dip to between 2 and 5 degrees.

Wednesday: A cold and mostly dry start on Wednesday with some bright spells developing. There is the threat of a spell of rain moving in across southern counties during the day but this remains uncertain. Highest temperatures of 6 to 9 degrees.

Thursday: Current indications suggest an area of low pressure will move close to Ireland on Thursday bringing some rain and the risk of strong winds. A chilly day is forecast with highest temperatures of 4 to 7 degrees.

Friday: A transient ridge of high pressure looks set to lie over Ireland for Friday bringing mostly dry weather conditions and light or moderate breezes. Highest temperatures of 5 to 8 degrees. Southerly breezes will freshen overnight and rain is expected to move in to affect western coastal counties.

Weekend: The weekend is expected to be unsettled with spells of rain and the risk of very strong winds.