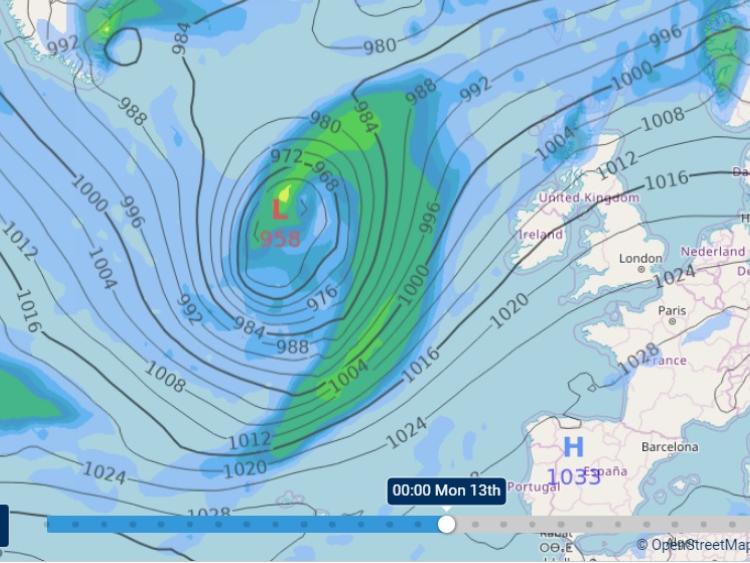 Met Éireann weather forecast charts show a succession of stormy fronts barrelling toward Ireland with their impact being felt this weekend and early next week.

A Status Yellow rain weather warning is already in place for parts of the west of Ireland while the forecaster is predicting heavy, persistent rain as well as strong and gusty winds at times.

Saturday and Monday look like being the windiest and wettest days while there could be some sun on Sunday.

A nationwide forecast and outlook covering the next week can be found here. https://t.co/9gKN6SVok4 pic.twitter.com/jV1Z04PoSY

National forecast issued on the Met Éireann website at 6.17 pm on January 9.

TOMORROW - FRIDAY 10TH JANUARY
A cold and frosty start on Friday with some icy stretches. Dry with spells of sunshine for the first half of the day but cloud will steadily thicken from the west and rain will move in to affect western and northwestern counties during the afternoon. The rain will extend eastwards during the evening. Highest afternoon temperatures of 5 to 8 degrees but turning milder in the evening in freshening southerly breezes.

Saturday: Parts of the east will start off dry on Saturday but heavy and persistent rain will spread countrywide through the morning, eventually clearing to showers later in the afternoon. Fresh south to southwest winds will veer westerly with the clearance of the showers. Highs of 11 to 13 degrees.

Saturday Night: A mix of scattered showers and clear spells on Saturday night. Lows of 2 to 5 degrees with some frost patches and light to moderate southwest winds.

Sunday: Drier and brighter on Sunday with good spells of sunshine and scattered showers. It will be a cold day with afternoon highs of just 5 to 7 degrees in light westerly breezes.

Sunday night: Dry for most of the country on Sunday night although patchy outbreaks of rain will push into Atlantic fringes overnight. Cloud will keep temperatures up at 4 or 5 degrees in the west but cooler in the east with lows of 1 to 3 degrees, with patchy frost likely. Southerly winds will be mostly moderate, but fresher along Atlantic coasts.

Monday: Current indications are for a very wet and windy day on Monday with strong and gusty south to southeast winds and gales expected along all coasts. The rain will be heavy and persistent at times with localized flooding possible.