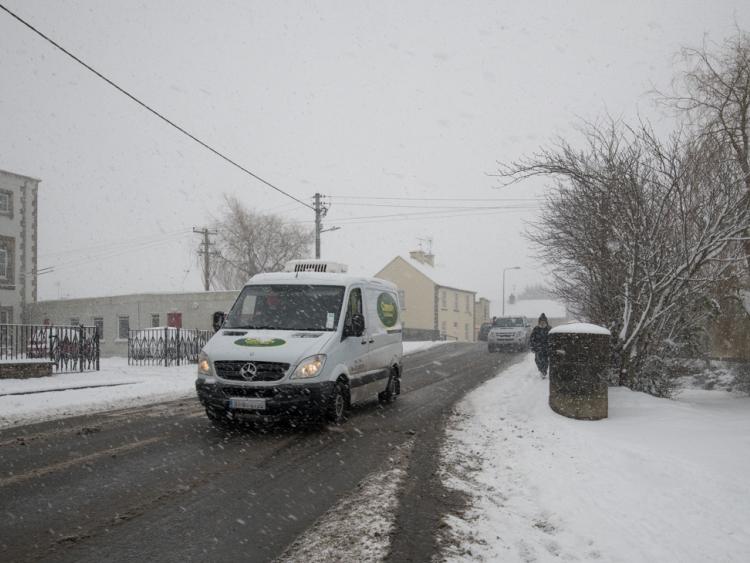 Met Éireann has given advance notice of sleet and snow in its weather forecast which features a spell of cold weather.

In its latest outlook, the forecaster indicates that the weekend could see the wintry conditions arriving. Daylight hours will feature a mix of sunny spells and scattered showers on Sunday, some heavy with a risk of hail and thunder in cold conditions.

"Later in the day a more persistent band of rain will push into the west of the country wintry some wintry falls possible on higher ground," says the forecast.

Met Éireann expects the weather to continue into the night.

"Wet and windy overnight on Sunday with heavy and persistent rain across much of the country and a risk of sleet and possibly snow on higher ground," says the forecast. More below tweet.

Our Atlantic chart shows precipitation and pressure forecast in 6 hour intervals for the next 7 days.https://t.co/9Giuj4CR5m
The national forecast and the national outlook for the coming days are available here. https://t.co/9gKN6SVok4 pic.twitter.com/Y4uaR4y3w5

TODAY - WEDNESDAY 22ND JANUARY
Some patches of fog will be slow to clear this morning. Cloudy and misty today and generally dry, but there will be the odd patch of drizzle. Some sunny spells will break through during the afternoon, best in the east. Mild, with highest temperatures of 9 to 11 degrees, in light variable breezes.

TONIGHT
Cloudy and mainly dry tonight with widespread mist and fog. Some dense patches of fog in places with very low visibility. Lowest temperatures of 3 to 6 degrees in light winds.

TOMORROW - THURSDAY 23RD JANUARY
Cloudy tomorrow, Thursday with patches of mist and fog lingering into the afternoon in some areas and patchy drizzle at times. Afternoon highs of 7 to 9 degrees, in light variable breezes.

NATIONAL OUTLOOK
Headline: High pressure continuing to dominate our weather for the rest of the week but a breakdown to more unsettled weather expected on Saturday.

Thursday night: Another misty and murky night on Thursday with some patchy fog. Lowest temperatures generally 3 to 6 degrees although temperatures could fall lower in limited clear spells.

Friday: Another cloudy day with patchy drizzle or mist. Light southerly winds will freshen along northwestern coasts through the afternoon with some bright spells breaking through. Highest temperatures of 8 or 9 degrees.

Saturday: Cloudy and dry at first. Southerly winds will moderate as a band of rain pushes into the west early in the afternoon, spreading eastwards through the day. Winds will veer southwestwards with the clearance of the rain. Highs of 8 to 10 degrees.

Saturday Night: The rain will continue to clear the east of the country overnight. Colder, clearer conditions will follow in behind from the west with scattered showers. Lowest temperatures of 0 to +4 degrees with frost forming overnight. Mostly moderate west to southwest winds will be fresher along northwestern coasts.

Sunday: A mix of sunny spells and scattered showers on Sunday, some heavy with a risk of hail and thunder. Later in the day a more persistent band of rain will push into the west of the country with some wintry falls possible on higher ground. Moderate southwest winds will back southerly and freshen through the day. Cold with highs of 3 to 6 degrees.

Sunday Night: Wet and windy overnight on Sunday with heavy and persistent rain across much of the country and a risk of sleet and possibly snow on higher ground. Southerly winds will be fresh and gusty with gales expected along coasts. Lows of 1 to 5 degrees.