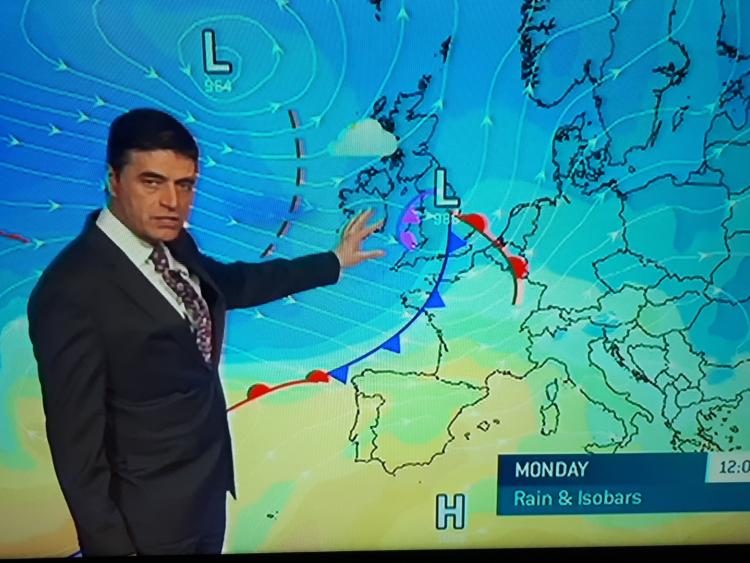 Met Éireann expects 'wintry showers' from Sunday into the early days of next week as the weather is set to significantly change.

In his forecast after the RTÉ news on Thursday night Met Éireann meteorologist Gerry Murphy said much colder weather would set in from early next week.

"After Saturday we are going to see a band of persistent rain crossing the country and for Sunday and the early days of next week much colder and more unsettled weather in store with rain and possible wintry showers," he said.

"That will mark a significant change in the weather we will see much colder blustery conditions developing on Sunday with plenty of showers and this cold air will bring a noticeable drop in temperatures and the cold unsettled weather set to dominate in through next week with more rain and possibly wintry showers at time," he said.

Here is our 7 day Atlantic Chart, showing the pressure and precipitation forecast in 6 hours intervals.https://t.co/9Giuj4CR5mhttps://t.co/9gKN6SVok4 pic.twitter.com/x1vundqNAt

Met Éireann forecast issued on its website issued at 6.09pm on January 23.

TOMORROW - FRIDAY 24TH JANUARY
Mist and fog will clear during the morning. It will be another mostly cloudy day with just the odd bright spell breaking through the clouds. Apart from the odd patch of light rain or drizzle it will be a mainly dry day. Maximum temperatures 7 to 9 degrees, in mostly light southwesterly or variable breezes.

NATIONAL OUTLOOK
Summary: Little change at first, but becoming more unsettled over the weekend. Turning much colder for the early days of next week, with a risk of wintry showers and a risk of frost at night. Mild and unsettled from midweek.

Saturday: Mainly dry, with a few bright spells, but mostly cloudy. A little patchy rain or drizzle is likely, especially on Atlantic coasts, turning more persistent there in the evening and early night. Max. 7 to 10 Celsius, in mostly moderate southerly winds, fresh to strong along west and northwest coasts.
On Saturday night, a band of more persistent rain will extend from the west. Clearer conditions, with scattered showers, will follow from the Atlantic later in the night and during Sunday morning, but it will turn cold. Min. 3 to 6 Celsius.

Sunday: Cold, with a mix of sunny spells and scattered showers, most of the showers in Connacht, west Ulster and west Munster, some turning to sleet later, with a risk of snow showers, mainly over high ground in the west and north. Max. 4 to 8 Celsius, in moderate southwesterly breezes, freshening later.
Sunday night will be very cold, with clear spells and scattered showers, most of them in the western half of the country. Many of the showers will be wintry and there is a risk of thunder, mainly in Atlantic coastal areas. Min. 0 to 3 Celsius, with a risk of frost and icy patches.

Monday and Tuesday: Very cold, with bright or sunny spells and scattered showers, many of them wintry, especially in Connacht and west Ulster, with a risk of thunder. Max. just 3 to 7 Celsius, in moderate to fresh southwesterly winds, increasing fresh to strong southwest to west by Tuesday. Very cold overnight, with a risk of frost and icy patches.

Further Outlook: Early indications suggest that it will become milder from midweek, but unsettled, with occasional rain. 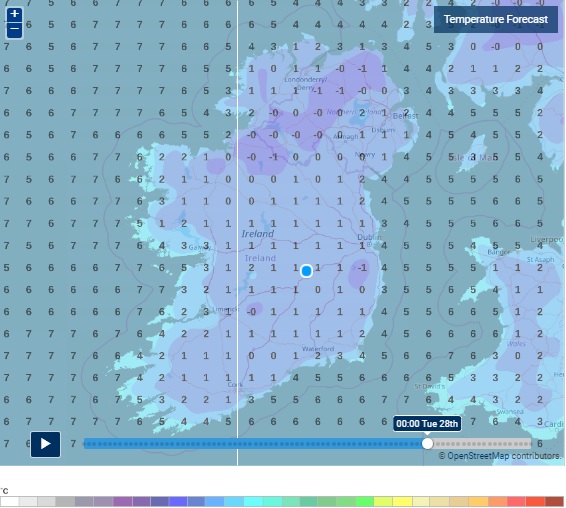