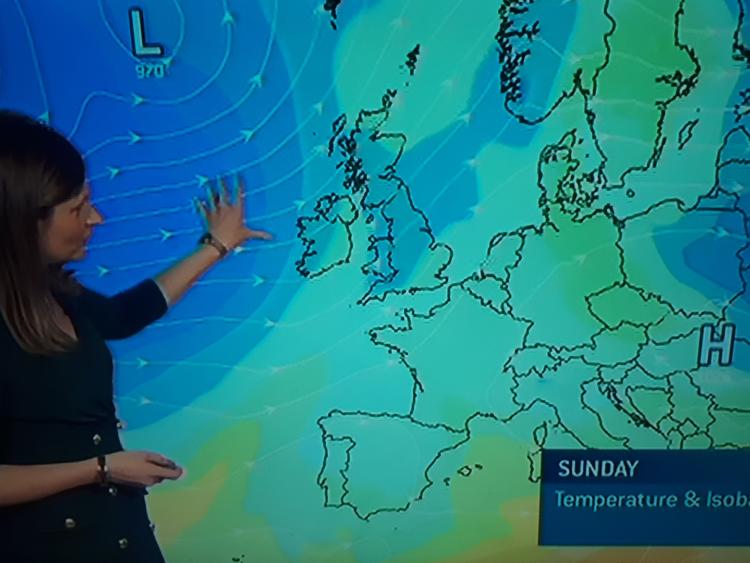 Met Éireann has forecast rain, hail, sleet, snow, thunder, frost and ice in its latest weather forecast and issued a weather advisory for cold weather in the coming days.

The forecaster issued a Weather Advisory for Ireland on Saturday evening. It says cold and wintry weather will develop from Sunday evening. The notices says showers of hail, sleet and snow will occur in places. It says snow showers will be most frequent in Ulster and Connacht and especially so on high ground.

Met Éireann meteorologist Michelle Dillon gave more details of what to expect in her update after the RTÉ news on Saturday,

"There is a change on the way in our weather. It is going to become cold tomorrow (Sunday) and for the early days of next week with some wintry showers starting from tomorrow evening. We'll have some frost and ice by night with some bright or sunny spells mixed in between the showers," she said.

The forecaster said rain would clear on Saturday night but it would become much colder as it does. Though cold, she said Sunday would be bright and dry during daylight hours.

Later on Sunday a system would move in along the west coast.

The cold snap will be short lived as it will become milder later on on Tuesday and into the rest of the week but it will remain on unsettled. More below tweets.

A nationwide forecast and outlook covering the next week can be found here. https://t.co/9gKN6SVok4 pic.twitter.com/Y4hT0dr0NP

Weather Advisory for Ireland:
Cold and wintry weather will develop from Sunday evening, details on: https://t.co/ozrQHtoOkt

SUNDAY 26TH JANUARY
Any lingering rain will clear eastern areas early in the morning and brighter colder weather will follow to all areas. Sunshine and isolated showers will follow during the day, with an isolated snow shower possible in Ulster and Connacht. Later in the evening a more organised band of showers will spread from the west. Some of the showers turning to sleet and snow, especially over hills in Connacht and Ulster with a risk of hail and thunder. Highs of 5 or 6 degrees, in light to moderate southwest winds but stronger along Atlantic coasts.

Cold on Sunday night with showers or longer spells of rain, sleet or snow. The snow mainly on high ground. Minimum temperatures of -1 to +2 degrees in fresh and gusty southwest winds.

Monday: A cold and blustery day on Monday with sunny spells and showers, some of sleet or snow. The showers will be heaviest and most frequent in the west in fresh and gusty southwest winds. Maximum afternoon temperatures ranging from 3 to 7 degrees, coldest across Ulster. There will be clear spells and blustery wintry showers on Monday night with minimum temperatures of -2 to +2 degrees and a fairly widespread frost in areas sheltered from the fresh westerly breeze.

Tuesday: It looks set to be cold and windy on Tuesday with some bright spells but also widespread showers. The showers will bring a mix of rain, hail and sleet with some snow on high ground. There will be a strong and gusty westerly wind with highest temperatures ranging just 3 to 6 degrees. Clear spells and scattered showers overnight but with the showers becoming increasingly isolated. Possibly an early frost with lows of 1 to 4 degrees but turning less cold later.

Mid-week: Current indications suggest it will turn less cold by mid-week but remaining unsettled with spells of wet and windy weather spreading from the Atlantic.