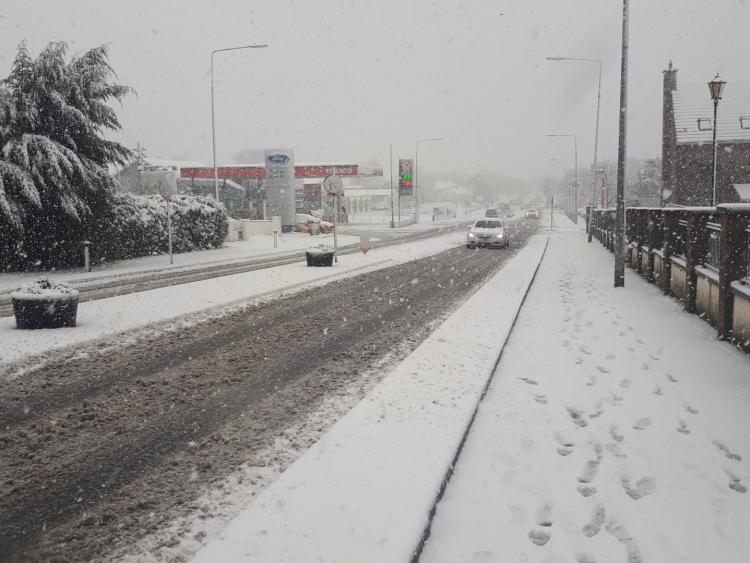 Hazardous conditions are on the cards due to snow an ice which has caused  Met Eireann to issue a Status Yellow snow ice weather warning for Ireland.

The warning says that hazardous conditions are expevted in places overnight and Tuesday morning due to compacted snow and ice.

The warning is valid from 10pm on Monday 27 to noon on Tuesday.

The Met Éireann says there will be widespread wintry showers tonight with a continued risk of hail and thunder. It says there  will be more snow leading to icy stretches on roads and paths with some accumulations, especially in the north, west and southwest. Lowest temperatures will dip to of -2 in a widespread frost.

Tuesday will start cold and frosty with icy stretches on untreated surfaces and some lying snow. There will be a mix of sunshine and scattered wintry showers, frequent in the west with a risk of hail and thunder there. MORE BELOW TWEETS.

A weather advisory for wintry weather remains in effect tonight. Widespread wintry showers with a continued risk of hail and thunder. Further falls of snow leading to icy stretches on roads & paths and some accumulations, especially in Connacht and Ulster. Lows of -2 to +2C. pic.twitter.com/7VdDombDp1

Widespread wintry showers tonight with a continued risk of hail and thunder. Further falls of snow leading to icy stretches on roads and paths with some accumulations, especially in the north, west and southwest. Lowest temperatures of -2 to +2 degrees in fresh southwest to west breezes with a widespread frost.

TOMORROW - TUESDAY 28TH JANUARY
Tuesday will start cold and frosty with icy stretches on untreated surfaces and some lying snow. There will be a mix of sunshine and scattered wintry showers, the showers frequent over the western half of the country with a risk of hail and thunder there. Highest temperatures of 4 to 7 degrees in fresh and gusty westerly winds, strong along Atlantic coasts.

NATIONAL OUTLOOK
The outlook for Tuesday night is for a mostly moderate west to southwest wind, temperatures of between zero and plus 2 degrees and mainly dry conditions for much of the country while showers continue in Ulster.

On Wednesday there'll be showery rain for a time, mostly through the northern and northeastern parts of the country, with mostly dry but cloudy conditions elsewhere. Temperatures will be between 7 and 9 degrees and winds will be moderate to fresh southwest to west. It'll be mainly cloudy over night keeping temperatures at around 3 or 4 degrees in the air.

Thursday will see rain move from the southwest to the northeast during the morning, clearing quickly to showers, with drier weather already establishing itself in the afternoon. Temperatures in the north will still be on the cold side but there'll be a recovery to slightly higher temperatures in Munster and south Leinster. It'll be mostly dry overnight although there's a risk of rain along western and northwestern areas.

On Friday there'll be outbreaks of rain in the morning, clearing to give mostly dry conditions for a time.

Current indications suggest the start of the weekend will be breezy at times with a spell of wet weather, particularly across the northern half of the country, clearing with drier, brighter and milder conditions moving in later.