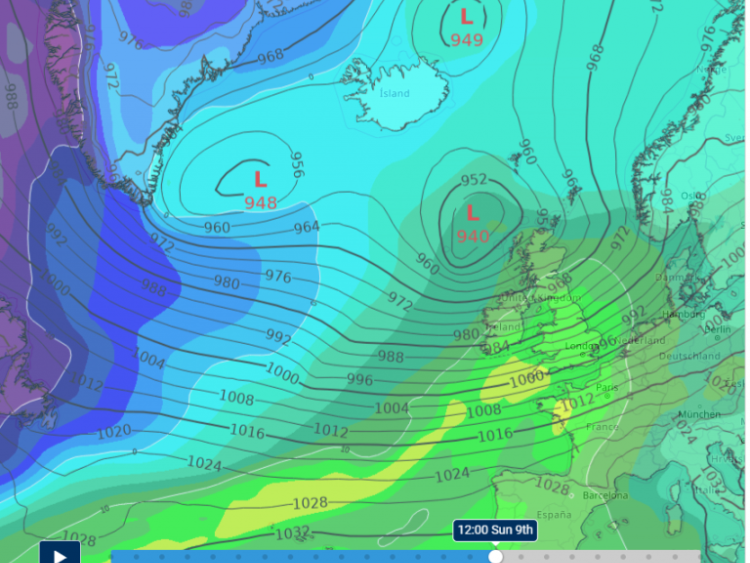 Met Éireann has issued two weather warnings for wind and rain as Storm Ciara sweeps across the Atlantic toward Ireland with the full force of its impact set to be felt through the weekend.

A Status Yellow Wind warning for Ireland is in place for Saturday and Sunday, February 8 & 9.

On Sunday, February 9 Met Éireann says Storm Ciara will produce very strong winds over Ireland on Sunday with a risk of damaging gusts.

Over the weekend the combination of Spring Tides and high seas as well as stormy conditions will result in an elevated risk of coastal flooding especially along southern, western and northwestern coasts.

The warning is valid from 9am Saturday, February 8 to 11:59pm Sunday February 9.

The Status Yellow rainfall warning for Ireland is also in place for the weekend.

On Saturday, February 8 a spell of heavy rain will spread eastwards across the country with 20-40mm expected, highest in the west and northwest.

On Sunday, February 9 another spell of heavy rain on Sunday will clear to squally wintry showers. Another 20-40mm likely.

There is a risk of localised flooding this weekend, especially over the western half of the country. The warning is valid from noon on Saturday to 3pm on Sunday.

The warnings were issued on Thursday, February 6 at 11am. Weather forecast details below tweets.

A nationwide forecast and outlook covering the next week can be found here. https://t.co/9gKN6SVok4 pic.twitter.com/cZb6oxGYnN

The national forecast issued on Thursday, February 6 at 12:11pm is as follows:

TODAY - THURSDAY 6TH FEBRUARY
It will continue dry across the country today with a mix of cloud and sunny spells. Afternoon temperatures will range from 7 to 10 degrees in generally moderate southeast winds, but increasing fresh along Atlantic coasts.

TONIGHT
Mainly dry overnight but with increasing cloud keeping temperatures above freezing for much of the south and west of the country with overnight lows of 4 to 7 degrees there. Clearer skies further north and east with minimum temperatures of 1 to 3 degrees with a touch of frost in sheltered spots. Moderate to fresh and gusty southeast winds will be strong along coasts. Some patchy rain is likely on southern and western coasts and hills before Friday morning.

TOMORROW - FRIDAY 7TH FEBRUARY
Friday will be a cloudy and rather blustery day with patchy light rain and drizzle spreading northeastwards over the country during the morning. A spell of heavy rain will move into the south and west in the afternoon, becoming widespread across the country in the evening. Afternoon temperatures of 9 to 11 degrees in fresh to strong and gusty south to southeast winds with gales along some coasts.

NATIONAL OUTLOOK
Headline: Wet and windy weather this weekend with winds potentially reaching storm force on Sunday at the coasts.

The rain will clear early Friday night and it will turn cold with temperatures falling to between 0 and +3 degrees with a slight or sharp frost in places. Winds will be moderate to fresh and southwest in direction but with gales along Atlantic coasts.

After a mostly dry start on Saturday morning, heavy rain and strong and gusty southerly winds will move eastwards over the country bringing a risk of very strong squally winds, with gales along all coasts and strong gale force winds along the northwest coast. The rain possibly lingering into the evening in parts of Leinster and Munster.

Cold and largely dry for a time on Saturday night with lows of 2 to 6 degrees. However another spell of rain and strengthening south to southwest winds will arrive into western areas before morning.

Current indications suggest a very strong to near gale force and gusty southwest wind will develop on Sunday along with heavy rain, as Storm Ciara tracks to the north of the country. The rain will clear to showers and squally westerly winds later in the day, with a risk of some hail and thunder. Highest temperatures 10 to 13 degrees.

Cold overnight on Sunday with lows of 0 to 3 degrees. A few showers will occur overnight and some of the showers turning wintry especially in the west and northwest of the country.

The early days of next week are likely to remain very unsettled, with generally strong winds, and potentially stormy conditions at times along with high seas. There will be spells of heavy rain interspaced with cold showery conditions, some of the showers turning wintry at times and some possibly with hail and thunder. Temperatures are likely to remain below average early next week with some overnight frosts expected also.